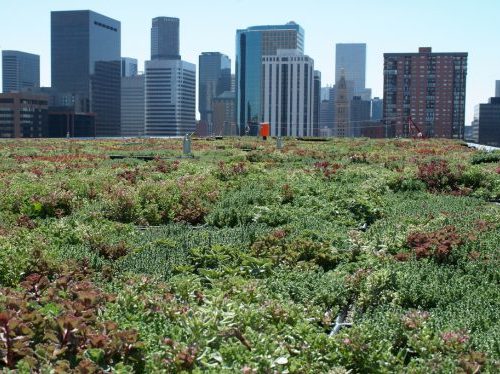 Green roofs rank #73 on Drawdown’s list of climate solutions. By the year 2050, an increase in green and cool roofs could save 0.77 gigatons of carbon at a net cost of US$1.39 trillion, while producing $988.5 billion in savings.

The history of green roofs can be traced back to the Vikings in Scandinavia, but only in the past 50 years have they taken off, particularly in Europe. The average roof is only used to shield people from the elements, and as Drawdown notes, conventional roofs also absorb the heat from high temperatures. This makes it difficult to cool the space below, while contributing to an urban heat island effect that can be dangerous for vulnerable populations like seniors and young children.

By contrast, green roofs are living ecosystems that can improve the quality of life in a city and curb emissions. They can even support “full-fledged gardens, parks, or farms—places where people can rest, recreate, and raise flowers or food.” That’s what happens in Brooklyn, where unused rooftops have become a hub for urban agriculture.

Cool roofs are described as the “kin” to green roofs, and can also help reduce emissions. Drawdown notes that these roofs reflect up to 80% of solar heat back into space, which decreases the energy used to cool buildings. Cool roofs have even been added to California’s building efficiency standards as a way to bring relief to cities during heat waves, though they’re less suited to areas with colder climates.

For both cool and green roofs, construction incentives and supportive policies are critical to promoting uptake. In the United States, San Francisco has even mandated that “15-30% of roof space on new buildings must be green, solar power, or both,” Drawdown states.