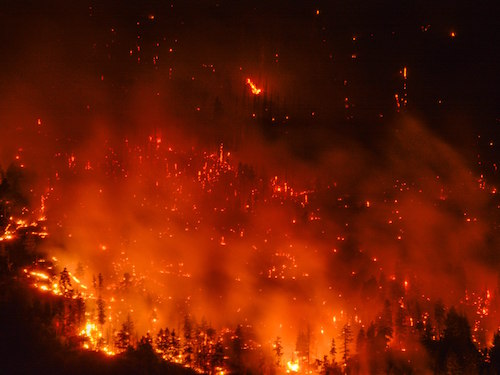 Canada’s vast boreal forest, one of the largest remaining intact ecosystems on Earth, is beginning to show signs of permanent damage and dissolution due to wildfires—which are becoming more frequent and intense as a result of climate change.

In a study for Natural Resources Canada and the University of Alberta, researchers “paired up forest areas that had similar climate and soil conditions and had last been burned by the same fire,” the Canadian Press reports. Half of the sample forest had seen a short window since it previously burned—no more than 17 years—while the other half had had at least 30 years to recover.

The difference was clear: the sections that had seen shorter intervals between fires showed far less species diversity, sparser undergrowth, and more deciduous trees than conifers. As well, “areas of exposed mineral soil, where all organic material had been burned off, were larger and more common.”

In sharp contrast, the long-interval forest sites supported dense patches of young conifers, with shrubs, flowers, and moss on a regenerating forest floor.

While occasional fires are, to some degree, necessary for a healthy boreal forest, they have historically been rare, research lead Ellen Whitman, a forest ecologist with NRCan and the university, told CP. With gaps of 30 years or more to recover, the boreal ecosystem has a chance to re-establish itself before being swept by flames again.

“As more years experience more extreme fire weather, [the blazes] are able to overwhelm that resistance that recently burned sites have,” Whitman said.

While the areas affected by more frequent fires are small, and “most are regrowing normally,” she added, scientists are concerned that the short-interval stands won’t experience a rebound in diversity as they mature. And things are getting worse, CP notes.

“With a longer fire season, larger fires, more of the landscape burning each year, the likelihood of encountering a recently burned area increases,” said Whitman. And creatures dependent on an intact boreal forest, like woodland caribou and songbirds, will suffer as a result.