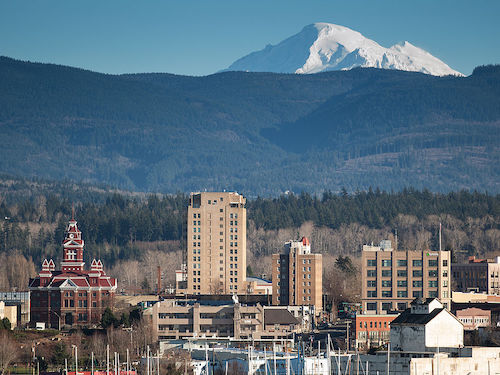 The town of Bellingham, Washington has become the latest U.S. city to consider banning natural gas for home heating as a way to combat the climate crisis.

Unlike the dozens of U.S. cities and towns that have adopted or proposed natural gas bans in new construction, Bellingham is looking at extending its focus to existing homes, as well.

The community “has long been looking to scale back its contribution to climate change,” the New York Times reports. “In recent years, city leaders have converted the streetlights to low-power LEDs, provided bikes for city employees, and made plans to halt the burning of sewage solids.”

But none of that has come close to eliminating the community’s carbon footprint. So now, city council is focusing on residential natural gas. That move has “prompted vigorous debate over how much one small city should try to do to avert climate catastrophe,” the Times says, at a time when the current federal government is refusing to step up.

Gas has long been touted as a lower-carbon alternative to coal, and the U.S. utility industry has largely managed its mounting coal phaseout by building new gas plants. “But natural gas offers its own troubling contribution of greenhouse gases—including methane leaks from natural gas infrastructure—and its production has begun to clash with environmental goals that now include not only cleaning up pollution, but also slowing the rise in global temperatures,” the Times notes.

With a “robust network” of installed hydroelectric capacity, the paper adds, the northwestern U.S. is in a position to switch of natural gas—but at a cost, and not without a well-funded pro-gas campaign from the local business and utility community.

Initially, the city’s climate task force considered a 2030 deadline for off-gas conversions. “In the end, it scaled back a bit,” the Times says. “Natural gas cooking appliances would still be allowed, but owners of homes and commercial buildings would be required to convert to electric heat-pump technology—or something equivalent—by 2040, with the possibility that the city could accelerate that to 2035. The measure under consideration would require electric heat conversions earlier than that when replacing heating systems.”

But it isn’t clear the measure has the majority of votes on city council, and opponents like the conservative Washington Policy Center say more modest measures like tree planting and methane capture in landfills would deliver greater benefits.

“This is about going to where we didn’t go before,” Lilliquist said. “We’ve grabbed the less controversial and low-hanging fruit. This fruit is higher on the tree.”

“They are saying we are going to bypass all the low-hanging fruit and climb to the very top of the tree,” countered the Policy Center’s Todd Myers.

At least some parts of the pro-gas campaign may be veering into hyperbole. “One graphic produced by businesses including Cascade Natural Gas, the provider in Bellingham, suggested that a full conversion from natural gas to electricity, including solar panels, could cost a typical homeowner as much as $82,750,” a number Lilliquist cast as propaganda designed to sow fear. Elected councillors are still considering their options, including incentives and other tools to reduce costs.

“The real number may be one-tenth that cost, but that’s still a lot of money for most households,” he said.

“Bellingham’s task force found that the average cost of installing an electric heat pump system was about $6,200 to $13,100 more than a gas furnace,” the Times writes.