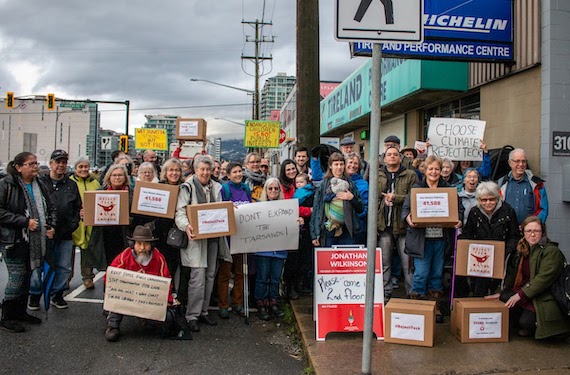 The petition and accompanying rally landed on Wilkinson’s doorstep on the same day he hosted an open house at his new riding office, Stand.earth reports.

“Prime Minister Justin Trudeau and his Cabinet are about to make their first major climate decision since being re-elected: whether or not to approve the largest tar sands mine ever proposed,” said Stand Climate and Energy Campaigner Sven Biggs. “This mega-mine would release a shocking amount of carbon pollution—the equivalent of putting 1.2 million cars on the road—making it impossible to meet our international climate commitments. The federal government must live up to its promise of climate leadership by rejecting Teck’s Frontier Mine.”

“Prime Minister Trudeau’s climate legacy is at risk, and his Cabinet has a choice to make,” said Leadnow Senior Campaigner Claire Gallagher. “They can choose bold climate action as they promised in the election, or they can approve Teck’s Frontier Mine and send us backwards. They can’t do both.”

“Approving this project in the era of climate emergency is irresponsible—it’s adding fuel to the fire,” said Environmental Defence Climate and Energy Program Manager Julia Levin. “Just months ago, two-thirds of Canadians voted for action on climate. Instead of expanding the oil and gas sector, what we need is investment in creating new opportunities for workers and communities.”In mid-December, Wilkinson said he was grappling with how the project could fit with Canada’s climate commitments—based on targets that he has since promised to strengthen. “That is something that we will have to be discussing and wrestling with as we make a decision one way or the other,” Wilkinson said, following a meeting with Alberta Environment Minister Jason Nixon. “That is a target that is not informed by politics. It’s informed by science.”