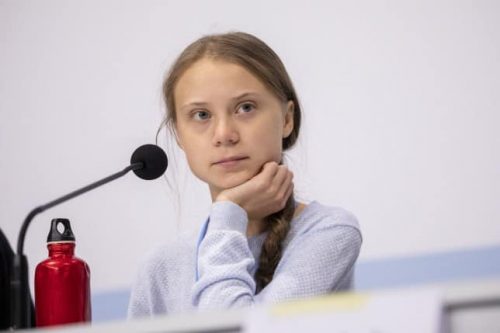 The annual World Economic Forum in Davos, Switzerland was a study in contrasts yesterday, with #FridaysforFuture founder Greta Thunberg slamming the world’s governments and business elites for climate inaction while the fossil industry touted carbon capture and storage as the path to climate stability.

“Pretty much nothing has been done, since global emissions of CO2 have not reduced,” Thunberg told a morning session yesterday. “[I]f you see it from that aspect, what has concretely been done…it will require much more than this. This is just the very beginning.”

After a year-long effort to amplify the IPCC’s landmark 1.5°C pathways report, published in October 2018, Thunberg said she’s still urging decision-makers and everyone else to “start listening to the science, and that we actually start treating this crisis as the crisis it is.” She added that her own celebrity status since she began her solo #SchoolStrike protests in Stockholm in 2018 is not nearly enough to get the job done.

“I’m not the person who can complain about not being heard—I’m being heard all the time,” she said during a panel of youth activists.

“Let’s be clear: we don’t need a low-carbon economy; we don’t need to lower emissions. Our emissions have to stop if we are to have a chance to stay below the 1.5°C target,” Thunberg added in a second appearance, not long after Donald Trump used a “30-minute campaign stunt” at the WEF to brag about his supposed accomplishments (and, according to news reports, avoid any mention of his impending impeachment trial before the U.S. Senate).

“Our house is still on fire. Your inaction is fueling the flames by the hour,” Thunberg told WEF participants. “We are still telling you to panic, and to act as if you loved your children above all else.”

But while Bloomberg News says concerns about climate change “dominated the annual business forum more than ever before,” much of yesterday’s focus came from fossil executives excited about carbon capture techniques that will give them a shot at salvaging their industry—even though the production emissions CCS addresses are just a fraction of the downstream emissions that result from using fossils’ product as directed.

“Oil and gas producers are under mounting pressure to help prevent a damaging rise in temperatures, and carbon capture is increasingly luring investors as a tool to curb emissions,” the U.S. news agency writes. “Whether pulled from the exhaust of smokestacks or from the open air, the CO2 can be buried underground or used to extract oil.”

“There are investors that care, that want to protect our environment,” and “those investors are starting to make a difference for us,” said Vicki Hollub, CEO of Houston-based Occidental Petroleum Corporation. “Within two years we will be building the largest direct air capture facility in the Permian,” the once-booming shale oil and gas basin in Texas, and “if we can perfect direct air capture, then we can use it anywhere.”

“Carbon capture is very important because we have still a huge amount of fossil fuels in the market,” International Energy Agency Executive Director Fatih Birol told Bloomberg Television. “It is the only technology which can marry the fossil fuels we have—oil, gas, others—and our climate goals.”

Earlier in the week, a new report by Greenpeace International called out two dozen banks that regularly attend the WEF that have collectively invested US$1.4 trillion in the fossil sector since the 2015 Paris Conference.

“The banks, insurers, and pension funds here at Davos are culpable for the climate emergency. Despite environmental and economic warnings, they’re fuelling another global financial crisis by propping up the fossil fuel industry,” said Greenpeace CEO Jennifer Morgan. “These money men at Davos are nothing short of hypocrites, as they say they want to save the planet but are actually killing it for short-term profit.”

Meanwhile, in a survey released Monday, climate change failed to crack the top ten in the list of priorities on the minds of corporate CEOs. The group placed climate and environment 11th, with over-regulation taking the top spot. Other top-ten concerns included trade conflicts, lack of skilled workers, and populist politics.“According to the survey, 24% of CEOs are ‘extremely concerned’ about climate-related issues, compared to 38% for over-regulation,” the Globe and Mail reports.