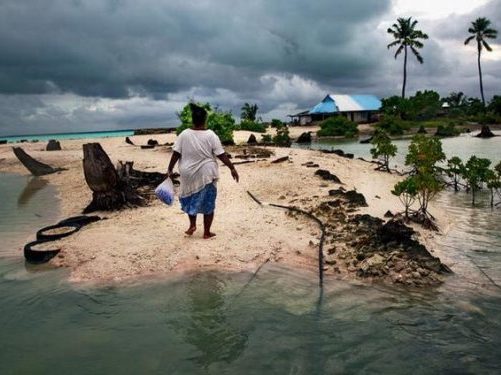 Countries can no longer send climate refugees back to nations of origin where the climate crisis might threaten their lives, according to a ruling by the United Nations Human Rights Committee earlier this month—even though the Kiribati resident who filed the original case lost his bid for relocation in New Zealand.

“The judgment—which is the first of its kind—represents a legal ‘tipping point’ and a moment that ‘opens the doorway’ to future protection claims for people whose lives and well-being have been threatened due to global heating,” The Guardian writes. “Tens of millions of people are expected to be displaced by global heating in the next decade.”

The test case took shape after Ioane Teitiota of Kiribati applied for protection in New Zealand in 2013, asserting that he and his family were at risk in one of the countries most severely threatened by sea level rise.

“The committee heard evidence of overcrowding on the island of South Tarawa, where Teitiota lived, saying that the population there had increased from 1,641 in 1947 to 50,000 in 2010 due to sea level rise leading to other islands becoming uninhabitable, which had led to violence and social tensions,” The Guardian states. “He also spoke of the lack of fresh water and difficulty growing crops due to salinity of the water table causing serious health issues for his family. He said that as Kiribati was predicted to be uninhabitable in 10 to 15 years, his life was endangered by remaining there.”

New Zealand courts rejected Teitiota’s application, and the UN committee agreed, concluding that while “sea level rise is likely to render the republic of Kiribati uninhabitable,” the 10- to 15-year time frame cited in the claim “could allow for intervening acts by the republic of Kiribati, with the assistance of the international community, to take affirmative measures to protect and, where necessary, relocate its population.”

But the committee also ruled that “the effects of climate change in receiving states may expose individuals to a violation of their rights…thereby triggering the non-refoulement obligations of sending states.” That finding “opens the way for other claims based on the threat to life posed by the climate crisis,” The Guardian notes.

“On a personal level for Ioane and his family it is bad news, because obviously it’s decided that his claim that his right to life was threatened in Kiribati wasn’t strong enough,” said Amnesty International Pacific researcher Kate Schuetze.

But “then they made some very strong statements clarifying the roles and responsibilities of states,” she added. “There would be a trigger of international responsibility for other governments not to return people to places where their life is at risk because of climate-induced changes.”

While the decision isn’t legally binding on national governments, “it points to legal obligations that countries have under international law,” The Guardian explains.

“Even though in this particular case there was no violation found, it effectively put governments on notice,” said Prof. Jane McAdam, director of the Kaldor Centre for International Refugee Law at the University of New South Wales. “What’s really important here, and why it’s quite a landmark case, is that the committee recognized that without robust action on climate, at some point in the future it could well be that governments will, under international human rights law, be prohibited from sending people to places where their life is at risk, or where they would face inhumane or degrading treatment.”

“The Pacific Islands will be the canary in the coal mines for climate-induced migrants,” Schuetze added. “The message in this case is clear: Pacific Island states don’t need to be underwater before triggering those human rights obligations,” which means that “I think we will see those cases start to emerge.”