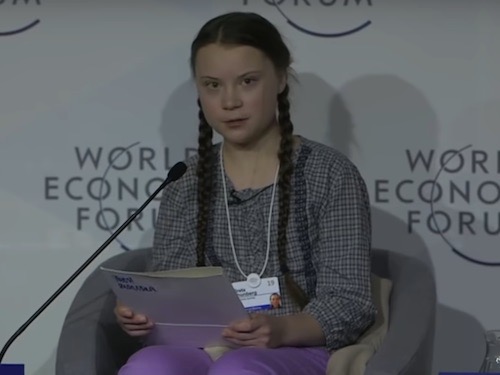 Global warming may be set to dominate this year’s World Economic Forum in the Swiss resort town of Davos, with FridaysforFuture founder Greta Thunberg scheduled to open a debate on how to avert “climate apocalypse” and everyone assuming the session will start on time despite an earlier, no doubt long-winded appearance by Donald Trump.

“Trump will deliver what the organizers describe as a special address on Tuesday, offering his brand of populism to attendees who represent governments, companies, central banks, and transnational organizations,” CNN reports. Thunberg is expected to take the stage just two hours later. Britain’s Prince Charles is scheduled for Wednesday, with a special address on how to save the planet.

Thunberg and co-authors from 16 other countries laid out their expectations for the gathering in a Guardian op ed earlier this month.

“We demand that at this year’s forum, participants from all companies, banks, institutions, and governments immediately halt all investments in fossil fuel exploration and extraction, immediately end all fossil fuel subsidies, and immediately and completely divest from fossil fuels,” they wrote. “We don’t want these things done by 2050, 2030 or even 2021, we want this done now—as in right now.”

Thunberg and colleagues added that they “understand and know very well that the world is complicated and that what we are asking for may not be easy. But the climate crisis is also extremely complicated, and this is an emergency. In an emergency you step out of your comfort zone and make decisions that may not be very comfortable or pleasant. And let’s be clear—there is nothing easy, comfortable, or pleasant about the climate and environmental emergency.”

The WEF has adopted Stakeholders for a Cohesive and Sustainable World as the theme for its 50th annual gathering, and “is asking all companies present to commit to net zero carbon emissions by 2050,” CNN says. Which means the often unhinged and verbose Trump, “who is aggressively rolling back environmental protections and pulling the United States out of the Paris climate agreement, may well be challenged over his view on climate change.”

“People are revolting against the economic ‘elites’ they believe have betrayed them, and our efforts to keep global warming limited to 1.5°C are falling dangerously short,” WEF founder Klaus Schwab said in a statement. “With the world at such a critical crossroads, this year we must develop a ‘Davos Manifesto 2020’ to reimagine the purpose and scorecards for companies and governments.”