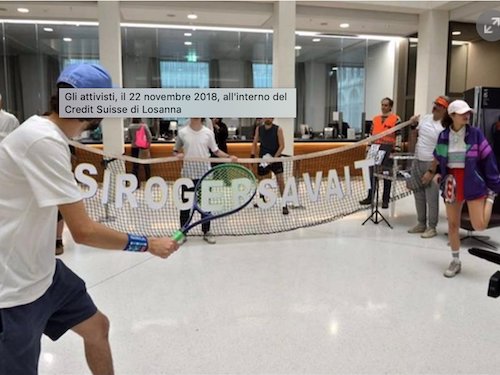 A judge in Lausanne, Switzerland has acquitted a group of youth protesters on trespassing charges and waived fines of CHf 21,600 (US$22,200) per person, ruling their actions were “necessary and proportional” to the “imminent danger” of climate change.

“Because of the insufficient measures taken to date in Switzerland, whether they be economic or political, the average warming will not diminish nor even stabilize. It will increase,” said Judge Philippe Colelough.

“In view of this, the tribunal considers that the imminence of danger is established,” he added, citing the country’s melting glaciers as an example. “The act for which they were incriminated was a necessary and proportional means to achieve the goal they sought.”

Reuters says observers in the packed courtroom “reacted with whoops of excitement and a standing ovation.”

“I didn’t think it was possible,” said protester Beate Thalmann through tears of joy. “If Switzerland did this, then maybe we have a chance.”

Switzerland is warming at twice the global average and has pledged to cut its emissions to net zero by 2050, “but activists say the country’s biggest impact is via the financial centre,” Reuters states. Credit Suisse, which had filed the charges against the activists, said it “respected their cause but deemed their actions unacceptable. The state will pay the fine instead.”