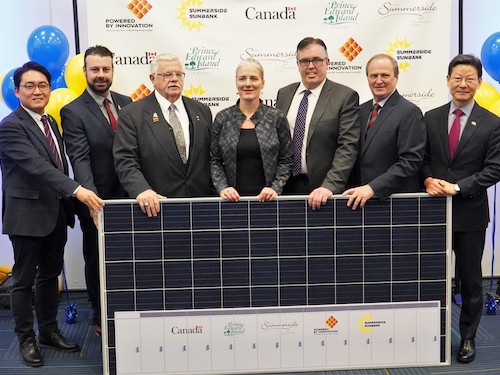 The project, the second phase of a continuing partnership between the city and Samsung Renewable Energy, will push the renewable share of Summerside’s electricity supply past 60%, The Guardian reports. [Note: @PEIGuardian is the local paper, not to be confused with The Guardian based in the UK.]

“Today is another major step forward in our growing energy sector, as well as our innovation agenda,” said Mayor Basil Stewart. “This project has furthered our commitment to a greener community and taken us a step closer to energy independence.”

“Summerside already has perfect conditions to embark itself as the fastest smart grid community in Canada,” said Samsung Renewable Energy President Edward Cho. “I believe other communities…are going to want to have this kind of system, instead of depending on very expensive commercial power.”

The Guardian calls the project the “culmination of years of hard work from a line of people stretching from PEI to South Korea.”

The 65,000 panels and eight batteries, each the size of a tractor trailer, will occupy an 80-acre/32-hectare city site that is already home to one of Summerside’s freshwater well fields. “The batteries will be housed on land just off the well field, in order to minimize possible contamination should a problem occur,” The Guardian explains. Construction will take nearly two years and create more than 200 jobs.

The three levels of the government all contributed money to the project: $26.3 million from Ottawa, $21.9 million from the province, and about $20.5 million from the city. “Of the city’s contribution, about $3 million will come from general tax funds, while the remainder will be financed,” The Guardian says. “Once the farm is online, the city expects to save at least $2 million per year” by buying less power from off-Island.