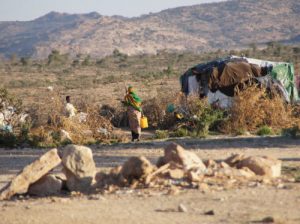 Particularly hard-hit is Zimbabwe, which has gone from being “the breadbasket of southern Africa” to having half of its population of 7.7 million declared “seriously food insecure,” the WFP says.

With Zimbabwe “experiencing its worst economic crisis in a decade, marked by soaring inflation and shortages of food, fuel, medicines, and electricity,” the climate crisis is exacerbating suffering, with recent cyclones and attendant flooding ravaging any crops that survived a devastating drought.

Together with seven of the other countries hardest-hit by hunger—Zambia, Mozambique, Madagascar, Namibia, Lesotho, Eswatini (formerly Swaziland), and Malawi—Zimbabwe is in line to receive “lean season” assistance from the WFP, with funds earmarked to help 8.3 million people currently experiencing “crisis” levels of hunger.

But “to date,” reports Reuters, the World Food Program “has secured just US$205 million of the $489 million required for this assistance, and has been forced to resort heavily to internal borrowing to ensure food reaches those in need.”

Should the agency not receive the funds it requires, “it will have no choice but to assist fewer of those most in need and with less,” warned WFP’s regional director for Southern Africa, Lola Castro.