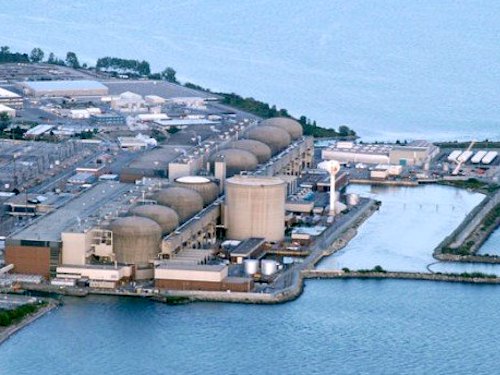 Millions of people across Ontario woke up in a panic early Sunday morning, after an emergency alert falsely announced an incident at the Pickering nuclear station east of Toronto.

By the time a follow-up message declared the alert a false alarm triggered by a training exercise gone wrong, the episode had produced a surge in local demand for emergency iodide pills, raised serious concerns about the provincial government’s plans to extend the operating life of the 1970s-era nuclear plant, and kindled widespread fears about a potentially calamitous power generation technology that fares best with public opinion when it can stay out of sight, out of mind.

“The alert was issued province-wide at 7:24 a.m. ET,” CBC reported. An hour to nearly two hours later, “Ontario Power Generation, the plant’s operator, tweeted without explanation that the warning ‘was sent in error’.” But by then, that error had “left people fuming, with scores of Twitter users flooding the OPG’s Twitter feed to share their disgust.”

“This is a completely unacceptable use of the Emergency #Alert System,” Andru Valpy wrote. “You had the entire province waking up in fear.”

“Me and probably a couple million people almost had an aneurysm [because] of that msg,” tweeted a user identified as Alex.

“That’s a really major error,” added Amber Waves. “People with anxiety disorders woke up to this and their health was impacted, never mind everyone else. Unacceptable.”

Pickering-area resident Thomas Perez slept through the alarm, but told CBC he knew what to do when his wife woke him with news of a problem at the nuclear plant.

“As soon as she told me that, I told her ‘Let’s get into the car and get out of here.’ That was my first reaction,” he said. “We woke up the kids, then I came and started heating up the car.”

Even after OPG issued the correction, Perez said his reaction was that “we’d better leave. It’s better to listen the news when we are out, not when we are here, because everybody is going to try to leave at the same time and we’re not going to be able to.” With nothing packed when everyone got in the car, he added, “my main concern was our life.”

Some reports from Pickering had locals picking up the alert, but reasoning that sirens would likely have gone off in a real radiation emergency. But Mayor Dave Ryan was still looking for answers.

“Like many of you, I was very troubled to have received that emergency alert this morning,” he tweeted. “While I am relieved that there was no actual emergency, I am upset that an error such as this occurred. I have spoken to the province, and am demanding that a full investigation take place.” Toronto Mayor John Tory agreed.

Solicitor General Sylvia Jones later apologized for the incident, explaining the alert was “issued in error to the public during a routine training exercise being conducted by the Provincial Emergency Operations Centre.” She added that “there was no incident at the Pickering Nuclear Generating Station that should have triggered public notification. Nor was there ever any danger to the public or environment.”

Despite the all-clear, the false alarm had generated 32,388 orders for potassium iodide (KI) pills by Tuesday. OPG usually receives 100 to 200 orders per month.

In Ontario, the pills “are distributed to residents within 10 kilometres of a nuclear facility; others living within a 50-kilometre radius of one can order them through a website called preparetobesafe.ca,” The Canadian Press explains. “The pills help protect the thyroid gland and reduce the risk of cancer if radioactive iodine is released into the air in the unlikely event of a nuclear emergency, according to the Canadian Nuclear Safety Commission. They saturate the thyroid gland with non-radioactive iodine and prevent radioactive iodine from being absorbed.”

Meanwhile, the false alarm collided badly with the Toronto Star’s revelation Monday that the provincial cabinet had met before Christmas and quietly approved extending the aging Pickering plant’s operating licence beyond 2024.

“Opened in 1971, [the facility] employs 4,500 people and generates 14% of Ontario’s electricity from six nuclear reactors. Two other reactors there have been shut down for 22 years,” the Star said. “The previous Liberal government, which had reopened two of the four reactors shut down by its Progressive Conservative predecessor in 1998, announced four years ago the station would go offline by 2024.”

A day later, Energy Minister Greg Rickford said the plant will be phased out gradually, with the last of the reactors shut down within five years. The actual decommissioning process will take 40 years, news reports note.

“The proposal put forward to cabinet from OPG was…an optimization of the decommissioning process,” Rickford said. “It was a phased-in approach that was proposed—one unit at a time over a defined period of time,” and “we’re taking it out for consultation. Elements of it are going to be subject to alterations or amendments to the existing licence, which goes to 2024 at the units that are functioning.”

“This secretive decision by the Ford government puts Ontarians at greater risk, as the Pickering nuclear station is now proposed to be operated over a decade past its best-before date,” responded Greenpeace Canada Program Director and nuclear specialist Shawn-Patrick Stensil. “The short-term electoral calculus may add up, but any transparent economic or risk assessment would opt for replacing this obsolete plant with safe, lower-cost renewable energy.”

Within hours of the alert, the Ontario Clean Air Alliance was out with a reminder that the next Pickering alert could be real.

“Environmental groups have long raised concerns about the inadequacy of emergency plans for this almost 50-year-old nuclear station, including the failure to plan for a Fukushima-scale accident,” wrote OCAA Director Angela Bischoff. “Assuming that millions of people will not try to flee in the event of a major accident or won’t be caught transiting through an area bisected by Canada’s busiest highway and a busy commuter rail corridor seems largely to be based on wishful thinking rather than a realistic assessment of the wisdom of operating a nuclear plant in the heart of our largest urban area. If Sunday’s event had turned out to not be a false alarm, chaos could well have resulted.”

The Alliance has a 2016 explainer on the special safety issues at the Pickering nuclear station.

In the aftermath of the alert, CBC followed up with a review of how the province would respond in a real nuclear emergency, while a new Oraclepoll Research survey found 82% of Canadians concerned about nuclear spills and 77% worried about neighbourhood safety and security near nuclear plants.

This alert was a reminder that the Pickering Nuclear Station is surrounded by more people (within 30 km.) than any other nuclear plant on the continent. It is also one of the oldest and biggest nuclear stations in North America. The plant also has a long history of serious accidents. Read our report on what a Fukishima-scale disaster could mean for Pickering. https://www.cleanairalliance.org/pickering-nuclear-emergency-next-time-it-could-be-real/