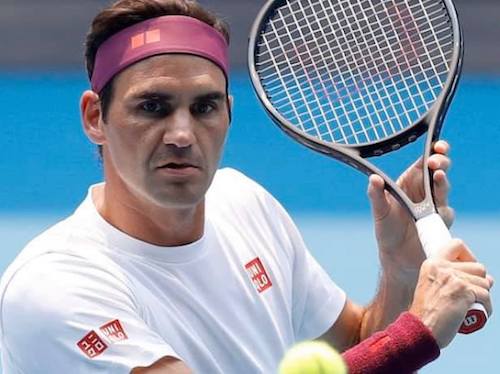 She’s got the #RogerWakeUpNow hashtag trending on Twitter, The Guardian reports, after calling attention to Federer’s sponsorship from Credit Suisse, a financial institution with close ties to the fossil fuel industry. “Everybody already hates banks, so nobody cares,” Kelly writes. So instead, a dozen Swiss activists “protested against Federer.”

The Guardian takes the story back to November 2018, when the protesters entered Credit Suisse branches, hoisted banners, and set up impromptu tennis matches indoors to shine a light on Federer’s relationship with the banking giant. They were in court this week after refusing to pay fines for the protest, maintaining they were “acting as whistleblowers for the climate emergency.”

With the pressure building last weekend, “Federer was forced to try something new—defend his integrity,” Kelly writes. “He didn’t do a very good job of it.”

“I appreciate reminders of responsibility as a private individual, as an athlete, and as an entrepreneur, and I’m committed to using this privileged position to dialogue on important issues with my sponsors,” he said, in what Kelly calls a “half-hearted rebuttal statement” from Melbourne, where he was preparing for a bushfire-impaired Australia Open tournament.

“What, exactly, does that mean? Is Federer going to talk Credit Suisse out of, you know, making money?” Kelly asks. “This is worse than saying nothing. It’s saying nothing and hoping people are stupid enough to mistake it for something.”

The columnist suggests Federer is just the first of many sports stars who can expect to face questions about their fossil-fuelled sponsorships and fossil-intensive travel itineraries. That’s because “no sector of society is more vulnerable to climate protest than pro sports,” he writes. “Professional athletes are highly visible, highly remunerated, highly mobile, highly out of touch, and highly sensitive to criticism. In the Protesting 101 manual, that is what is called a five-point target.”

And yet “it’s hard to feel sorry for the pros. They set themselves up for this with their great love of easy causes. Nobody does a better job of wearing pink on the right days or looking mournful during a moment’s silence. There has been no social ill they can’t find a way to co-opt for marketing purposes.”

Not until “climate change caught global traction. This issue can’t be pushed off to the side by wearing the perfect T-shirt during warm-ups.”

Kelly goes deep on the way climate protest can intersect with the culture around professional sports, concluding that Federer’s “sponsorship flail is a tipping point” that leaves the sports industry with very little it can say in response.

“In the very short term, we’ll wait to see what Federer does (aside from dropping a few bills in the charity collection basket),” he writes. “If he cuts Credit Suisse loose, that’s a story. If the fires are still burning when the Australian Open starts in a week’s time, that’s a story. [With coal seams on fire in Lithgow, they most certainly will be—Ed.] If the players don’t figure out a cunning way to twist the narrative to suit themselves, that’s a story.”

And “what happens when you put a bunch of stories like that together? It becomes a trend. Trends become movements. And movements are bad for business.”