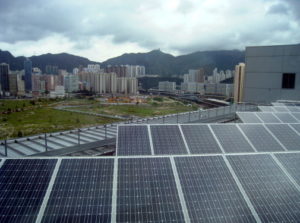 First installed on a New York City rooftop in 1884 by American inventor Charles Fritts, solar arrays are today found atop buildings around the world—from the floating reed islands of Lake Titicaca, to the suburbs of Munich, to the state buildings of Ghandhinagar in western India, to the Googleplex headquarters in central California.

“Transforming a square metre of rooftop into a miniature power station is proving irresistible,” Drawdown states. Most immediately, rooftop solar panels are affordable, and their price is falling by the day. Beyond the emissions generated in their production, their carbon footprint is effectively zero. They also “produce energy at the site of consumption, avoiding the inevitable losses of grid transmission” and help local utilities meet power demand at peak hours when they’re connected to the grid.

That individual households can both contribute to their communities’ energy needs and profit from their contribution when they sell power back to the grid illustrates the third core benefit of rooftop solar, Drawdown adds: “With producer and consumer as one, energy gets democratized.”

Nowhere is this more important than in the rural and poor parts of the world. With more than a billion people still unconnected to a power grid, rooftop solar is “accelerating access to affordable, clean electricity and thereby becoming a powerful tool for eliminating poverty,” Drawdown states. “It is also creating jobs and energizing local economies.” In Bangladesh alone, 3.6 million home solar systems have produced 115, 000 direct jobs and 50, 000 more downstream.