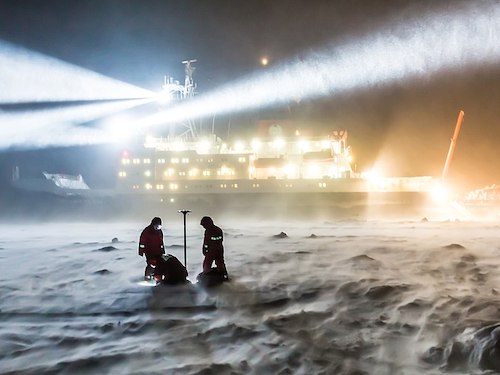 The world’s biggest-ever Arctic study expedition is being stunned, stymied, unnerved, and occasionally exhilarated, as a rotating team of more than 300 researchers operating from a German icebreaker scramble to understand the complex, changing ecosystem at the heart of the climate crisis before it collapses.

Scientists participating in the 17-nation, US$134-million Multidisciplinary drifting Observatory for the Study of Arctic Climate (MOSAiC), which began in late September, “will spend a year stuck in the sea ice aboard the Polarstern, moving only at the speed of the ice’s natural drift,” the Washington Post reports. “Participants in the first leg of the voyage recently returned to land, bringing backstories of bears, brittle ice, and a polar landscape that was even more unstable than anticipated.”

“The Arctic is the epicentre of global warming,” said team leader Markus Rex, an atmospheric scientist at Germany’s Alfred Wegener Institute. “We have had to constantly adapt to the changing ice environment, and we will continue to do so. But it is hard to predict what is going to happen next.”

“We are teetering on the edge of feasibility,” agreed expedition coordinator Matthew Shupe, an atmospheric scientist at the University of Colorado, Boulder’s Cooperative Institute for Research in Environmental Sciences. In the near future, with even less Arctic ice remaining, “this kind of project…setting up an ice camp for a whole year, is not going to be possible.”

Post science reporter Sarah Kaplan opens her story with an account of a ferocious Arctic storm that opens a “tremendous fissure” in the ice floe surrounding the ship, forcing researchers to scramble onto the surface to retrieve and restore their instruments.

“For millennia, the constant cap of ice that covers the North Pole has provided vital protection for the planet. Sea ice reflects at least two-thirds of light back into the atmosphere, whereas open ocean absorbs almost all of the sun’s heat,” Kaplan explains.

But now, “the sea ice is shrinking. The amount of ice in summertime—when its reflective powers are most vital—is about three million square miles smaller than it was in 1980. At the current rate of decline, year-round ice could vanish in a couple of decades, destabilizing global weather patterns and accelerating the pace of warming.”

Already, Shupe said his 2.5-month stint at the beginning of the MOSAiC expedition “was characterized by constant struggle with fragile and easily fractured sea ice,” the Post recounts. “New cracks and fissures form in the ice daily, throwing the carefully-coordinated camp into disarray.”

The news story recounts the day in October when Shupe and his colleagues heard a “grumble” below them, saw that a “narrow, dark crack was racing toward the horizon,” and realized their environment was changing where they stood.

“It is so cool to be embedded right in the middle of this new Arctic state,” Shupe told Kaplan. “That’s exactly why we want to be here.”

The news story digs into the conditions and challenges the scientists are encountering, from curious bears to bitterly cold conditions, as well as “magical moments” that may not last much longer as the Arctic warms.