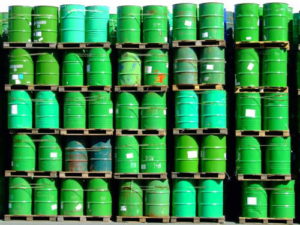 Long before an early January geopolitical crisis led to an errant missile attack on a civilian airliner, with 176 lives lost, Donald Trump was making it clear that his Middle East strategy amounted to trading blood for oil.

“Right now, the only soldiers we have in that area are essentially the soldiers that are keeping the oil,” Trump said in early December, explaining the new role he’d laid out for American troops in eastern Syria. “So we have the oil. And we can do with the oil what we want.”

“It was perhaps the most jaw-dropping moment in Donald Trump’s impromptu, marathon news conference” during last month’s NATO summit in the UK, CBC correspondent Murray Brewster wrote at the time.

“The U.S. president has, for over a month, railed on about securing control of Syria’s oil resources to America’s benefit—partly as a way to save face over his sudden abandonment of Kurdish allies in the face of a Turkish incursion into northern Syria, partly to paper over the broken promise to withdraw U.S troops from the country entirely,” Brewster explained. “What made this performance especially jaw-dropping was his suggestion that America should have—and by extension could have—pillaged the oil resources of other nations.”

“We’ve taken the oil,” Trump told media. “I’ve taken the oil. We should have done it in other locations where we were. I can name four of them right now.” (Though Brewster said he didn’t.)

“It might have been the random musings of a stressed-out president facing impeachment,” the veteran reporter wrote. “That might be too generous an interpretation, however, given Trump’s bottom-line approach to alliances—where cash transactions in exchange for Washington’s support rule the day.”

And that dynamic “leaves allies pondering some uncomfortable questions. What does this mean for the future? And how willing should any country be to support an America that muses openly—perhaps illegitimately—about stealing the resources of other nations?”

Lawyer Stuart Hendin, a specialist in the law of armed conflict, said the remarks raised a conundrum for Canada and other U.S. allies. “Why would one partner want to be with a force when you really never know [what] the political whims are going to be?” he asked. “What [the remarks] create is a fear and a potential lack of respect.”

Trump National Security Advisor Robert O’Brien put forward what Brewster called a “somewhat more rational” explanation for the U.S. holding control of oilfields in eastern Syria as a way to starve the self-styled Islamic State of Iraq and the Levant (ISIL), also known as ISIS, of oil revenue to fund its operations—even if the beneficiaries now include the rogue regime of Syrian dictator Bashar al-Assad.