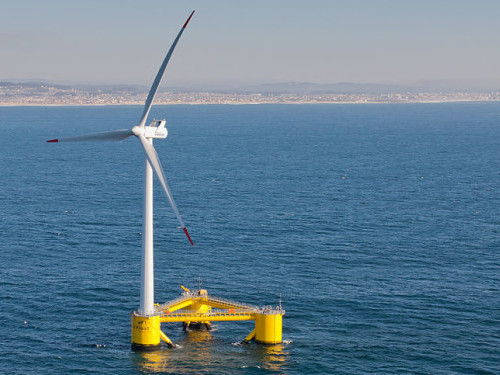 The world’s biggest floating wind turbine went into operation off the Portuguese coast at the end of last month, with the first of three 8.4-megawatt units supplied by MHI Vestas delivering power for the WindFloat Atlantic project.

Yesterday, offshoreWIND.biz said the second turbine had been towed into place, while the final one had been assembled at the Port of Ferrol in Spain.

One feature of the project is a 19.25-kilometre (12-mile) cable, chained to the seabed 100 metres below the surface, that connects the turbines to a substation in Portugal. “That sort of depth is outside the comfort zone of fixed bottom offshore wind, and it is that capability that lies at the root of floating wind’s advantages,” Greentech writes.

The location also “sidesteps the challenges offshore wind has faced with regard to the visual impact of turbines visible on the horizon in promising markets like France.”

Greentech summarizes the development of floating wind turbines in Europe, with more than a dozen projects expected to go online by 2022. An installation off Norway will generate 88 megawatts of electricity; the rest are all under 50 MW. But larger developments are on the horizon.

“France is planning a trio of 250-megawatt tenders just for floating wind,” writes reporter John Parnell, while the re-elected Johnson government in the UK “has committed to supporting the technology”, with a financing approach that the offshore wind industry favours.

“With floating infrastructure so prevalent in the North Sea oil business,” Parnell adds, “the interest from Equinor, Shell, and Repsol should come as no surprise.”