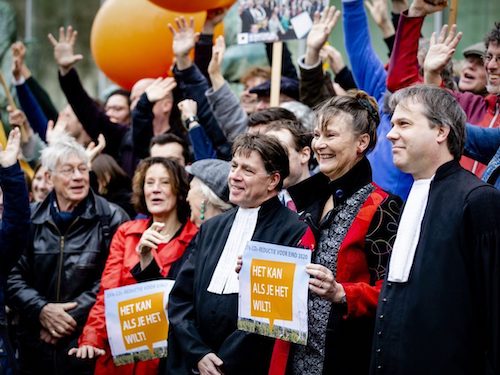 Dutch campaigners are declaring an “immense victory for climate justice” after a strongly-worded supreme court judgement December 20 upheld governments’ human rights duty to protect citizens from climate change and ordered The Netherlands to cut greenhouse gas emissions 25% below 1990 levels by the end of this year.

“Activists in a packed chamber of the Supreme Court in The Hague erupted into applause and cheers as Presiding Judge Kees Streefkerk rejected the government’s appeal against earlier rulings” ordering the rapid emissions cuts, The Associated Press reports. Urgenda, the Dutch climate and sustainability organization that shepherded the case through the process of trial and appeal, “hailed the ruling as ‘a groundbreaking decision that confirms that individual governments must do their fair share to reduce greenhouse gas emissions’.”

“I am extremely happy that the highest court in The Netherlands has confirmed that climate change is a real, severe problem and that government should do what they themselves have declared for more than 10 years is necessary, namely between 25% and 40% reduction of CO2,” Urgenda Director Marjan Minnesma told AP.

“It’s not just the final decision but the way the judges argued their reasoning,” added Urgenda legal counsel Dennis van Berkel. “The court was very clear. Human rights protect people against the impacts of climate change, and the government and parliament have to respect those human rights when defining their policies. That’s why this is a case for the courts to decide, because the dangers of climate change are so massive that they are human rights issues.”

“Having followed this case along its trajectory, it began not only with a well-argued case from Urgenda but a really carefully thought out decision from the original district court,” agreed Carroll Muffett, president of the Center for International Environmental Law (CIEL). “The more thoroughly these issues are analysed, the more inescapable the conclusions have become: that every state has a fundamental human rights obligation to address the threat of climate change and to address it now, not in the future.”

“This landmark ruling provides a clear path forward for concerned individuals in Europe—and around the world—to undertake climate litigation in order to protect human rights, and I pay tribute to the civil society groups which initiated this action,” said UN High Commissioner for Human Rights Michelle Bachelet in a published statement.

In its ruling, the supreme court agreed the state “had clear obligations to protect the environment under Articles 2 and 8 of the European Convention of Human Rights involving the right to life and the right to a private and family life,” Climate Liability News writes, adding that the “landmark” case inspired similar litigation in the United States, Norway, Pakistan, Ireland, Belgium, Colombia, Switzerland, and New Zealand.

The Netherlands government had “previously said it would comply with the ruling, but disagreed with the courts’ opinion that it had a legal duty to protect the environment for its people,” CLN says. Now, “I can guarantee we will do everything we can to achieve the goal,” said Prime Minister Mark Rutte.

While  a report last month from The Netherlands’ Environmental Assessment Agency said the country is on track to reduce emissions 19 to 26% from 1990 levels by the end of 2020, Urgenda’s Minnesma called the estimate “very, very, very optimistic”.