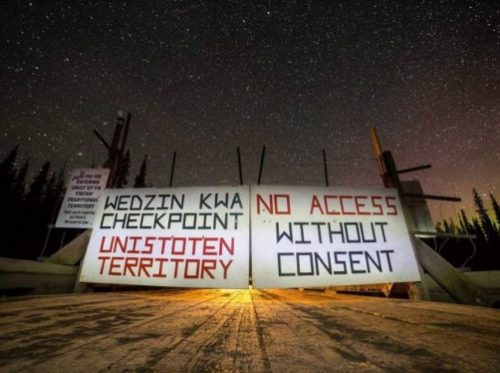 Wet’suwet’en land defenders issued an eviction notice to a Coastal GasLink pipeline work site near Houston, British Columbia Saturday but were expecting a stepped-up RCMP presence in their territory, after a provincial supreme court judge extended an existing interim injunction against their blockade of the controversial, C$6.6-billion project.

“Coastal GasLink is in violation of Wet’suwet’en law, and it is our responsibility now to uphold Wet’suwet’en law to maintain the integrity of our territories for future generations,” read a letter from hereditary chiefs, instructing all project staff and contractors to leave the territory immediately.

“We’ve tried the avenues available,” said hereditary chief Na’moks (John Ridsdale). While Coastal GasLink employees initially reacted to the notice with “arrogance and entitlement”, he added, “it was explained to them that we are peacefully there. We witnessed them leaving, because we were staying there until they did. Then they left, and it was peaceful.”

“All CGL workers have now been peacefully evicted from Unist’ot’en & Gidimt’en territories,” the Unist’ot’en Camp tweeted afterwards. “Under the authority of Wet’suwet’en law and of the hereditary chiefs of all five clans, we are standing up for the last of our lands and we need you to stand with us.”

Coastal GasLink employees complied with the order, CBC reports. “All CGL workers have now been peacefully evicted from Unist’ot’en & Gidimt’en territories,” the Unist’ot’en Camp tweeted afterwards. “Under the authority of Wet’suwet’en law and of the hereditary chiefs of all five clans, we are standing up for the last of our lands and we need you to stand with us.”

“We sang our songs and drummed and wished them well,” Na’moks said. “These are employees, but we needed to let the decision-makers know that we do not agree with them—we follow our law.”

A Coastal GasLink spokesperson said work on the site was to resume later this week, adding that the people evicted over the weekend were security staff.

“Our preference has always been to find mutually agreeable solutions through productive and meaningful dialogue,” the company added in a statement. “We have reached out to better understand their reasons and are hopeful we can find a mutually agreeable path forward.

“To that end, we are requesting to meet with Unist’ot’en and the Hereditary chiefs as soon as possible.”

But Na’moks said the community was expecting other visitors, as well.

“We do expect the RCMP to bring it to another level,” he told The Canadian Press Friday. “They did it last year, they’ll do it again this year.”

“In this time of reconciliation, with B.C. being the first province to legislate [the UN Declaration on the Rights of Indigenous Peoples], this ruling by a court in B.C. against Indigenous rights and recognition truly proves that industry, not the people, can control the province and its laws,” he said earlier in the week, in direct response to the ruling by Justice Marguerite Church.

Church’s late December ruling restrains blockaders from “barring workers from getting through their checkpoints along a remote logging road near Houston, B.C.,” CBC wrote. “Wet’suwet’en Nation members Freda Huson (Howilhkat) and hereditary chief Smogelgem, the two named defendants in the action, had argued the checkpoints are legal under Wet’suwet’en law because the company doesn’t have permission from the head chief of the Dark House hereditary house group to enter or pass through their territory.” But Church disagreed.

“The defendants may genuinely believe in their rights under Indigenous law to prevent the plaintiff from entering Dark House territory, but the law does not recognize any right to blockade and obstruct the plaintiff from pursuing lawfully authorized activities,” she wrote. While acknowledging that “the aboriginal title claims of the Wet’suwet’en remain outstanding and have not been resolved either by litigation or negotiation, despite the urging of the Supreme Court of Canada,” CBC says the judge questioned whether the checkpoints were truly established to enforce Wet’suwet’en law.

Na’moks said the community is considering a range of possible legal responses, including an appeal of Church’s decision and a constitutional challenge. “We have a number of avenues open to us that we’re looking at right now,” he said.

An RCMP spokesperson told CP it respects the ruling and the judicial process, and didn’t indicate when it would enforce the injunction. “The RCMP respects the rights of individuals to peaceful, lawful, and safe protest and we are committed to facilitating a dialogue between all parties,” said Corporal Madonna Saunders. “We are impartial in this dispute and it is our hope that this can be resolved peacefully.”

Yet a peaceful solution wasn’t exactly what Mounties were contemplating in an internal strategy memo that emerged December 20. “Canadian police were prepared to shoot Indigenous land defenders blockading construction of a natural gas pipeline in northern British Columbia, according to documents seen by The Guardian,” the UK-based newspaper wrote in an exclusive report.

The “notes from a strategy session for a militarized raid on ancestral lands of the Wet’suwet’en Nation” showed RCMP commanders arguing that “lethal overwatch is req’d”, a term The Guardian explained as “deploying an officer who is prepared to use lethal force”. The memo from commanders instructed officers to “use as much violence toward the gate as you want”, while a separate document said arrests would be needed to “sterilize the site”.

One document said the people arrested might well include children and grandparents. “No exception, everyone will be arrested in the injunction area,” officials wrote. Another memo suggested children might be apprehended by social services, a disclosure The Guardian called troubling “given the violent history of residential schooling in Canada and the disproportionate number of Indigenous children currently in the child welfare system.”

Huson told The Guardian the RCMP’s violence during last year’s raid matched a long history of colonial violence. “In our experience, since first contact, RCMP have been created by the federal government to dispossess Indigenous peoples of their lands,” she said. “They have proven [that] through their harassment of my people to support Coastal GasLink in invading our territories.”

“With terminology like ‘lethal overwatch’, ‘sterilize the site’, and the threat of child welfare removing our children from their homes and territory, we see the extent to which the provincial and federal governments are willing to advance the destruction of our lands and families for profit,” agreed Gidimt’en Checkpoint spokesperson Sleydo’ (Molly Wickham). “The state has always removed our people from our lands to ensure control over the resources. This has never changed,” and even with UNDRIP now before the provincial legislature, “the RCMP are occupying our territory for the sole purpose of protecting industry and ensuring extractive projects proceed unhindered.”

The RCMP called the Guardian report “unsubstantiated, incomplete, and inflammatory”, adding that it had damaged relations between the police and the communities. “Whatever the source, the assertions made in the article do not in any respect reflect the spirit and intent of the direction of the RCMP commanders charged with planning and carrying out the court’s direction, nor does it reflect what actually occurred,” the force said in a statement.

A Guardian spokesperson stood by the paper’s “carefully considered and researched” report, adding that “the records seen by The Guardian emerged during court proceedings in British Columbia. We are confident that it is factually correct and stand by the story,” including its interpretation of the term “lethal overwatch”.

“I trust that you were as disturbed as I was to read that senior members in the chain of command of the RCMP had discussed such extreme violence…in response to a civilian protest,” Harris wrote to Blair. “We are committed to protecting the constitutional right to peaceful protest and are concerned by the unacceptable words and phrases The Guardian reported were used,” replied Blair spokesperson Scott Bardsley in an e-mail to the Globe and Mail, adding that Blair’s office had raised the issue with the RCMP.

“There are a number of very deeply concerning words, phrases, and terms used to a situation that is immensely delicate,” added Indigenous Services Minister Marc Miller. “This is something that we need to revise as a government and take a look at that, because the terminology is entirely unacceptable.”

Meanwhile, pipeline owner TC Energy announced just before the new year that it had sold a 65% interest in the pipeline to private investment firm KKR and Alberta Investment Management Corporation (AIMCo). And the Toronto Star reported that ancient Indigenous artifacts along the pipeline route will be destroyed as construction crews move through Wet’suwet’en territory—and provincial heritage laws won’t prevent it.

“Where our ancestors used to be laying, (they’ll be) shoved to the side and made into a pile of dirt,” said Mike Ridsdale, environmental assessment coordinator at the Office of the Wet’suwet’en Nation. “We need legislative tools for First Nations to have a better say in what is happening on the ground,” he added. “If not, then we are going to lose our culture.”