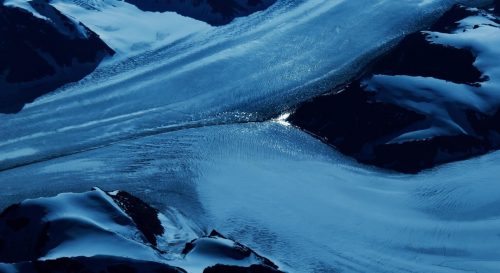 Humans may still have time to stop Greenland’s melting, preventing Arctic ice sheet collapse and devastating sea level rise. But the time left may be short.

LONDON, 30 December, 2019 – It’s still possible, but it’s far from certain: stopping Greenland’s melting can be done, but it must be done soon.

Greenland is the northern hemisphere’s single richest store of frozen water: the island’s bedrock holds enough to raise global sea levels by seven metres and drown or wash away the world’s coastal communities, including the great cities of New York and Miami, Shanghai and Kolkata, Amsterdam and London.

And the pattern of geological evidence – outlined in the Proceedings of the National Academy of Sciences – combined with climate models suggests that any sustained temperature rise could trigger an irreversible melt of the entire southern Greenland ice sheet.

The scientists suggest that the threshold for this calamity could be between 0.8°C above the post-Ice Age norm, and 3.2°C.

In fact, because of profligate use of fossil fuels and the release of greenhouse gases into the atmosphere, the planet has already warmed by around 1°C above the level for most of human history, and warming of at least 3.2°C by the end of this century now seems almost certain.

Researchers publish their conclusions with the intention that they should be examined, tested, challenged and perhaps overturned. But widespread alarm at the rate of melt and mass loss in Greenland has been consistent and increasing with the years.

Researchers have repeatedly established that melting each summer is increasing the rate at which glaciers flow and deliver ice to increasingly warmer northern seas, and that this rate of melting has itself begun to accelerate.

So Nil Irvali of the University of Bergen and colleagues took a closer look at the story told by microfossils within cores from the ice and the ocean floor during four interglacial periods over the last 450,000 years.

During those warm spells ocean levels rose dramatically, and in two episodes Greenland’s vanishing ice could have contributed more than five metres in one case, and up to seven metres of sea level rise in the other.

And in all four of those interglacials, conditions reached temperatures higher than they are right now.

Concern about the stability of the Greenland icecap is no surprise: the Arctic is already warming faster than anywhere else on the planet, thanks to profligate use of fossil fuels and the destruction of the rainforests, and researchers worldwide have begun to identify triggers that feed back into further warming: rain, for instance, in winter; the loss of cloud cover in summer; and the deposits of soot from polar wildfires that darken the snows and enhance the absorption of the sun’s rays.

Years ago, the phrase “at a glacial pace” ceased to be a valid cliché: US scientists clocked one river of ice moving at a rate of 46 metres a day.

So the new study simply confirms fears that already are widespread. What remains to be settled is the point at which the decline of the ice sheet becomes irreversible, the Bergen scientists say. As the ocean warms, this feeds back into the process of melting and triggers longer-term feedbacks.

“The exact point at which these feedbacks are triggered remains equivocal,” say Dr Irvali and her co-authors. “Notably, the critical temperature threshold for past Greenland ice sheet decay will likely be surpassed this century. The duration for which this threshold is exceeded will determine Greenland’s fate.” – Climate News Network