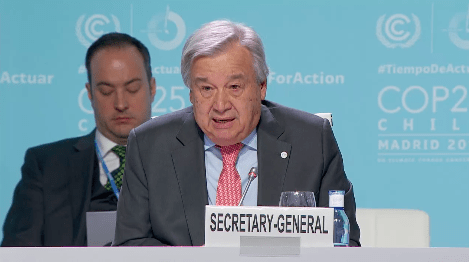 Disastrously as COP 25 turned out for anyone expecting coordinated action on a mounting global emergency, two of the world’s leading climate campaigners are pointing to a shift in language and emphasis that could echo through future UN climate conferences for years to come.

For the first time, report Catherine Abreu and Jamie Henn, institutions and UN diplomats up to and including Secretary General António Guterres used the “F words”—fossil fuels—to name and call out the major cause of the climate crisis, and of the chronic dysfunction in the hallways and back rooms of the COP itself.

For anyone who’s never attended a COP, it’s a small, incremental, overdue shift. But it matters that “for the first time in the United Nations space you can say the f-words in polite company,” they write. It’s a “crucial” political development that “will help shape international climate politics for years to come.”

As recently as 2015, the Paris Agreement “ran 16 pages, but didn’t mention the words ‘fossil fuels’, ‘coal,’ ‘oil,’ or ‘gas’ once,” note Abreu, executive director of Climate Action Network-Canada, and Henn, co-founder and strategic communications director at 350.org. “That’s a striking omission considering the central role that fossil fuels play in contributing to the climate crisis. Nearly two-thirds of the greenhouse gas emissions contributing to global warming come from the production and burning of coal, oil, and gas.”

With fossil fuel production hitting yet another all-time high this year, and global emissions up 4% since countries signed on to the Paris accord, “it’s as if Alcoholics Anonymous just called itself Anonymous, and no one ever mentioned whiskey, beer, or wine”.

And fossil companies have polluted global climate negotiations as surely as they have the global atmosphere. “Since the ‘conference of the parties’ began 25 years ago, fossil fuel industry lobbyists have had unfettered access to the process. Unlike the World Health Organization, which bans tobacco lobbyists from taking part in negotiations about tobacco cessation efforts, the UN Framework Convention on Climate Change (UNFCCC) has no protections against industry corruption,” they note.

And throughout the last two weeks of disgraceful, failed negotiations at COP 25 in Madrid, “big oil companies like Shell and industry front groups like the Canadian Association for Petroleum Producers were busy pitching various carbon trading schemes and geoengineering technology designed to allow them to continue to produce fossil fuels, the one thing we need to stop if we’re going to truly address the climate emergency. If you want to blame someone for the failure of COP 25, pointing a finger at the fossil fuel industry and the countries that do their bidding would be a good place to start.”

Which is why “it’s so important that for the first time in this process we can talk about phasing out fossil fuel production without getting (too many) dirty looks. The change in norms is first and foremost thanks to the tireless advocacy of activists on the front lines of this crisis, especially Indigenous communities who have led the fight against fossil fuel expansion. Their insistence that we must ‘keep it in the ground’ is finally penetrating the political process. When the UN secretary general opened COP 25 he said, ‘we simply have to stop digging and drilling,’ something that would have gotten him thrown out of the building just a few years ago.”

Abreu and Henn point to the Montreal Protocol on ozone-depleting substances as a successful example of a “supply-side” approach to protecting the global environment.

“The climate talks should take a similar approach by phasing out production of  ‘climate-destroying substances’— namely, fossil fuels,” they write. “Part of that plan must ensure that there is a just transition away from fossil fuel energy for workers, communities, and developing countries. It’s not poorer countries or working people that caused this crisis. It’s the oil industry CEOs who knowingly spread misinformation and delayed progress,” and “they’re the ones who need to pay.”