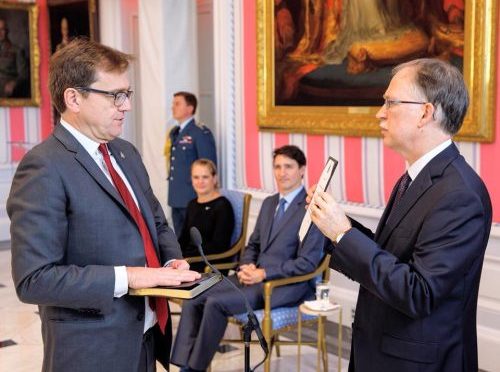 This post has been updated.
Seventeen of 37 federal cabinet ministers received instructions to address some aspect of the climate crisis, and National Observer says Environment Minister Jonathan Wilkinson emerges as “an especially active and influential figure in cabinet,” in the long-awaited mandate letters published Friday by Prime Minister Justin Trudeau.

The list “includes ministers whose portfolios have traditionally overlapped with environmental concerns, such as the minister of natural resources and the minister of oceans and fisheries,” Observer writes. “But Trudeau is also challenging officials such as the minister of Canadian heritage, who will ‘work with national museums to increase Canadians’ awareness of climate change’ and work with Wilkinson on new legislation to regulate federally owned heritage lands.”

As Observer notes, Heritage Minister Steven Guilbeault was a longtime climate and environmental campaigner before he ran for Trudeau’s Liberal Party in the downtown Montreal riding of Laurier-Sainte-Marie.

• Wilkinson’s mandate letter instructs him to “lead in implementing the whole-of-government plan for climate action, a cleaner environment, and a sustainable economy. This includes exceeding current 2030 targets and developing a plan to achieve a net-zero emissions economy by 2050.” He will get a boost in that effort from Deputy PM and Intergovernmental Affairs Minister Chrystia Freeland. Wilkinson will also be responsible for “setting legally-binding, five-year emissions reduction milestones based on the advice of experts and consultations with Canadians,” working with Natural Resources Minister Seamus O’Regan to complete flood maps for the entire country, implementing a ban on single-use plastics, protecting biodiversity and species at risk, and expanding zero-emission vehicle sales to 10% of all new purchases by 2025, 30% by 2030, and 100% by 2040.

• O’Regan’s mandate letter calls on him to “ensure that our energy and natural resource sectors remain a source of good middle-class jobs, prosperity, and opportunity across the country. This includes supporting resource communities and workers as they shift into cleaner technologies and Canada meets its climate action objectives, while also supporting and promoting the competitiveness of our Canadian companies in order to attract investment, open international markets, and get resources to markets.” He’s also responsible for delivering a new program of free energy audits and interest-free home energy retrofit loans, along with Families Minister Ahmed Hussen, and working with Wilkinson to implement Trudeau’s campaign promise to plant two billion trees over the next decade.

• Finance Minister Bill Morneau is to ensure that the proceeds the government insists it will receive from the financially tenuous Trans Mountain pipeline expansion will be invested in clean energy projects and nature-based climate solutions. Morneau’s mandate letter also calls for a 50% tax cut for zero-emissions technology developers and manufacturers and instructs him to “finalize a report, which will include a list of federal fossil fuel subsidies including the description of the subsidies, annual costs, and analysis of the subsidies. This report will be made public once a peer review is finalized.” It sets no deadline for Morneau’s office to complete the long-delayed review, nor even to inventory the fossil subsidies it pays out to industry.

• The ministers of health, environment, and agriculture are to work on new pollution protection measures under the Canadian Environmental Protection Act.

“People have been clear that they want progress on the issues that matter most, from fighting climate change and strengthening the middle class to walking the road of reconciliation, keeping people safe and healthy and positioning Canada for success in an uncertain world,” Trudeau said in a statement Friday. In the Speech from the Throne earlier this month, Governor-General Julie Payette noted that “Canada’s children and grandchildren will judge this generation by its action—or inaction—on the defining challenge of the time: climate change.”