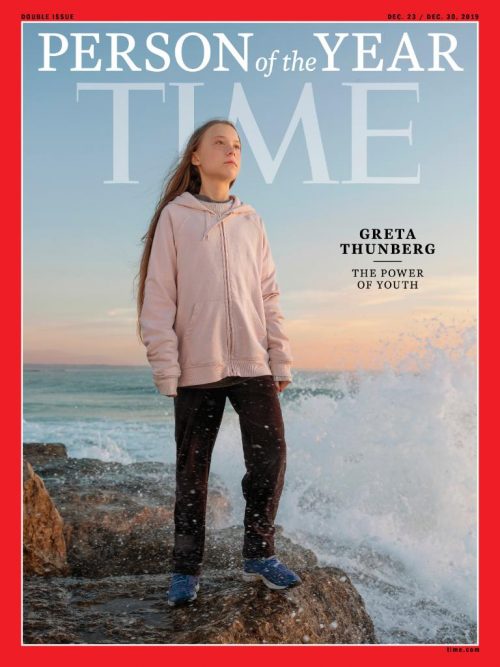 For speaking truth to power, and inspiring millions of people of all ages around the world to do the same, 16 year-old #FridaysForFuture founder Greta Thunberg has been named Time Magazine’s Person of the Year for 2019.

“She is the youngest individual to have won the accolade,” reports Reuters, citing an excerpt from Time’s celebration of the young Swede who was only 15 when she began striking for climate action. “In the 16 months since [her protests began], she has addressed heads of state at the UN, met with the Pope, sparred with the President of the United States, and inspired four million people to join the global climate strike.”

Climate Reality Project founder and former U.S. vice-president Al Gore said Time had made a “brilliant choice” in selecting Thunberg, who he said embodies the “moral authority of the youth activist movement demanding that we act immediately to solve the climate crisis.” Gore added: “She is an inspiration to me, and to people across the world.”

Thunberg said she was “a bit surprised” by Time’s decision. “I could never have imagined anything like that happening,” she told the Associated Press. “I’m of course, very grateful for that, very honoured,” but “it should be everyone in the Fridays for Future movement because what we have done, we have done together.”

Part of the inspiration that led to the award comes from Thunberg’s determination not to be intimidated by power, especially when it’s wielded by bullying climate deniers. Reuters recalls how a video of Thunberg “giving U.S. President Donald Trump what media described as a ‘death stare’ at a UN climate summit in New York in September went viral on social media.”

Earlier this week, Brazilian President Jair Bolsonaro (aka “Capitão Motoserra”, or Captain Chainsaw) called Thunberg a “Pirralha,” or “brat”, after she spoke out against escalating violence against Indigenous people in the Amazon, most recently the murder of two tribesmen. In response, Thunberg repurposed the insult into the biographical description on her Twitter account. When Trump tweeted insults about her Time Magazine win, her Twitter bio changed again.

“A teenager working on her anger management problem,” she snarked. “Currently chilling and watching a good old fashioned movie with a friend.”

Thunberg, who dashed back to Europe by racing catamaran in time for COP 25 rather than flying, “was typically blunt in her assessment of politicians’ efforts” in Madrid, reports Reuters. She said this year’s climate negotiating session “seems to have turned into some kind of opportunity for countries to negotiate loopholes and to avoid raising their ambitions.”