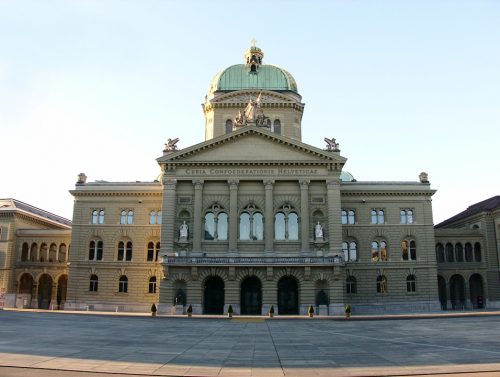 The newly-constituted parliament in Switzerland, elected in a fall vote in which the climate crisis took centre stage, may soon instruct the country’s central bank to drop all fossil fuel assets from its US$800-billion investment fund, Reuters says in an exclusive report this week.

“Swiss lawmakers are preparing a campaign that would make targeting climate change one of the policy objectives of the Swiss National Bank, alongside the traditional monetary targets of ensuring price stability and fostering economic growth,” the news agency writes. “The push is coming from the centre-left Social Democrats (SP) and the Greens, which achieved record results in October’s elections,” and will begin with a motion in the parliament’s lower house.

With US$800 billion in assets, the SNB is one of the biggest reserve banks in the world. Its portfolio includes shares in Arch Coal, ExxonMobil, and Chevron, Reuters says.

But possibly not for much longer.

“This is a climate emergency, and we need to take action as soon as possible,” said Greens legislator Adele Goumaz Thorens. “The SNB has invested so much money, it is incredible, and could really be an actor for change.”

“The SNB is the eighth-biggest institutional investor worldwide, and it gives Switzerland a huge weight internationally,” added Climate Action Switzerland spokesperson Sandro Leuenberger. “It’s the biggest lever Switzerland has, and we have to use it.”

SNB hasn’t commented on the resolution. But while the bank “shuns shares in companies which cause severe environmental damage,” Reuters says it has “resisted using its investment clout to promote green causes because of the risk of conflicts of interest or politicizing monetary policy.”

“At present the SNB doesn’t have a mandate, so they don’t tackle these risks,” said SP lawmaker Beat Jans. “It’s our job as politicians to give them the tools to do this.”

The divestment decision “must pass both houses of parliament,” and “passing the upper house, which has a centre-right majority, will also be tough,” Reuters says. But campaigners “are banking on concern in Switzerland, where temperatures are rising twice as fast as the global average, triggering record hot summers and melting Alpine glaciers.”