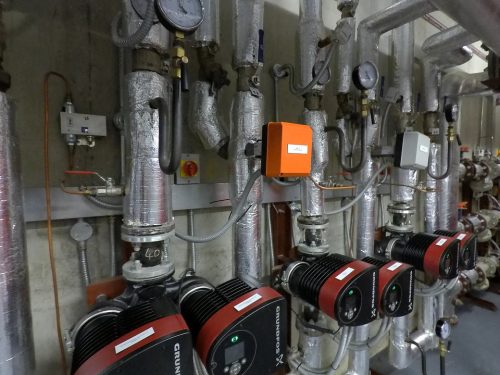 Community-based district energy systems are spreading across Canada despite steep up-front costs and tough competition from cheap natural gas, with innovative examples popping up in Vancouver, Yellowknife, Charlottetown, and more than 2,600 other places in between.

Highly efficient, extremely reliable, and designed to use locally-sourced energy, district energy is also increasingly climate friendly, reports the CBC. The United Nations’ District Energy in Cities Initiative notes that district energy can “reduce energy consumption and costs from heating and cooling by up to 50%, store large amounts of energy at low cost, [and] make transitions to sustainable heating and cooling sources fast and cost-effective.”

The approach involves linking multiple buildings into a single, central heating and cooling system that is also climate resilient, able to keep running through extremities of weather “that are becoming more frequent with climate change and that often knock out the electricity needed to run many traditional heating systems,” CBC states. “That’s why they’re often hooked up to places like hospitals that can’t afford to lose power.”

Bruce Ander, president and CEO of Markham District Energy in the Greater Toronto Area, said his system “has had more than 99.99% reliability since it launched in 2000—in 165,000 hours of continuous operation in 20 years, it’s been down just 2.5 hours.”

While district energy systems aren’t new to Canada—some of the units in operation today have been around for more than 100 years—environmental concerns mean that “new projects are popping up across the country,” CBC writes, from “a project in Vancouver that recovers heat from sewer water to provide heat and hot water to more than 30 condo buildings, to one that cools Toronto office towers in summer with water from the depths of Lake Ontario.”

A key benefit to district energy, say users, is that the energy source involved can be chosen to fit the often overlapping needs of a local community. CBC cites land-strapped Charlottetown, with little room for landfills and “no equipment installed to prevent methane generated by rotting garbage from escaping into the atmosphere”. The community burns its trash to produce heat, which is then distributed throughout the city in underground pipes that circulate heated water.

Then there is Teslin, Yukon, whose newly-installed district energy system burns “locally sourced wood chips, generating jobs and keeping C$300,000 a year that would have been spent on imported diesel in the local community,” said project manager Blair Hogan, president and CEO of Gunta Business Consulting.

“The wood comes from trees cleared for development, and more will be cleared in the future to create fire breaks to protect the community from wildfires, a risk that grows with climate change,” adds CBC.

Anders said the biggest challenge facing district energy is the “up-front cost to install the infrastructure, especially since it must be done before there are any buildings with paying customers attached.” That means there “has to be some sort of some assistance in some manner from higher levels of government,” he added.

Another challenge is the low price of gas, currently the dominant heating fuel in Canada. “To compete with natural gas—it’s a tough one,” said CanmetENERGY senior engineer Lucio Mesquita.