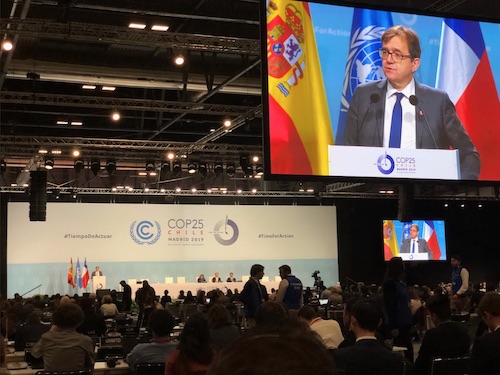 Canada earned praise for promising to legislate a 2050 deadline for net-zero carbon emissions, but big emitters like Australia, Brazil, Saudi Arabia, India, and China were called out for blocking progress, as COP 25 moved into a crucial round of high-level negotiations this week in Madrid.

In his speech to the opening of high-level negotiations Tuesday, Environment and Climate Minister Jonathan Wilkinson pledged “not only to meet our Paris target, but exceed it.” He said the country will introduce net-zero legislation “with milestones every five years, paired with a just transition act to keep people at the centre of our policies,” National Observer reports.

“Net-zero legislation will change the conversation in Canada,” responded Dale Marshall, national program manager for Toronto-based Environmental Defence. “Zero means zero. It sets a marker that we will no longer be using fossil fuels, so it becomes the lens for approving or rejecting projects and policies from now on.”

In a written statement, Wilkinson spokesperson Moira Kelly said the 2050 net-zero target is “in line with the science”. She added that Ottawa will appoint an expert panel to “help advise us on the best path to net-zero, and we have committed to legislating five-year targets to help get us there.”

Climate Action Network-Canada Executive Director Catherine Abreu praised Wilkinson for “sending all the right signals on long-term climate ambition with legislated commitments, and a refusal to punch a hole through the Paris Agreement with bad market rules.” But she said the minister “is missing one big important thing—a commitment to come to the COP with a new and improved 2030 Paris pledge.”

Urgent as it will be to fill that gap, Canada still emerged as a bright spot on a day when countries couldn’t even agree to include language acknowledging the climate emergency in the conference communiqué.

“There’s an effort right now to block the words ‘climate urgency’ in text from Brazil and Saudi Arabia, saying we haven’t used these words before in the UN, so we can’t use them now,” Greenpeace International Executive Director Jennifer Morgan told the BBC. “This gap between what’s happening on the outside and what’s happening in the science, and this ‘UN speak’ that won’t react and drive something is very frustrating.”

Carlos Fuller of Belize, chief negotiator for the Alliance of Small Island States (AOSIS), went on record accusing large emitters of blocking progress on a range of key issues. Fuller said Brazil, Saudi Arabia, India, and China were “part of the problem” at the COP.

Fuller said the four countries he’d called out were trying to re-examine wealthy countries’ failure to take significant action on climate change before 2020, in what he called a “game of chicken” that could threaten the success of the talks.

“They are part of the problem. They are looking too much backward to say that the developed countries have not done what they should have done and hence we are not going to do the same thing,” he said. “I disagree with that totally. We are all on this one planet together. We need to recognize the mistakes of the past and not replicate them.”

On a parallel track, a member of the European Parliament from The Netherlands accused Saudi Arabia, Australia, and Brazil of blocking negotiations on Article 6 of the Paris deal, setting the terms for an international carbon trading market, Euractiv reports.

“You have to avoid double counting, and you need to have decent rules. If not, you are really going to undermine the Paris Agreement,” said Greens MEP Bas Eickhout. “And unfortunately, there are some players who would like to do so. Australia, Saudi Arabia, Brazil, they are clearly not fighting for environmental integrity in the rules. And if you don’t have that in place, you can do a lot of harms.”

Australia Energy and Emissions Reduction Minister Angus Taylor managed to avoid any reference to his country’s devastating, climate-driven bushfires in his address to the COP.

“The mood among many campaigners is low, as there seems to be little hope of progress on the two major outstanding issues that need to resolved here. These are the question of carbon markets and the issue of loss and damage,” BBC writes. “While there are still several days to go, there is hope that the presence of political figures such as [ex-New York mayor Michael] Bloomberg and new announcements by the European Union and others will help foster an ambitious agreement. But there is also deep concern that this might not happen.”

“Most vulnerable countries have joined a growing number of state and local governments, business leaders, investors, and others—both in the United States and around the world—in announcing ambitious climate action commitments,” said Alden Meyer, director of strategy and policy at the Union of Concerned Scientists. “Sadly, the world’s biggest emitting countries, which account for all but 19% of global carbon emissions, have failed to take responsibility to do what’s required to stave off some of the worst impacts. These countries need to confirm their intentions to take such actions in 2020.”

Elsewhere at the COP, China’s new chief negotiator, former environment vice-minister Zhao Yingmin, criticized the Trump administration’s decision to pull out of the Paris Agreement. “Addressing climate change is a joint global effort, [and] no one should be absent,” he told media. “China will work with all sides to…lay a solid foundation for the comprehensive implementation of the Paris climate accord.” Two dozen states and Puerto Rico had stepped up to fulfill the U.S. Paris commitment, Chile unveiled a long-awaited law that commits to net-zero emissions by 2050, and 631 investors with US$37 trillion under management—one-third of global monetary assets—weighed in to support carbon pricing and an end to fossil fuel subsidies.

“Delegates are finally saying the ‘F’ words—‘Fossil Fuels’,” CAN-Rac’s Abreu told Agence France-Presse, but it’s taken them 25 years to get there. In Climate Action Network-International’s opening statement to the high-level negotiations, she scorched countries for taking so long to cover so little ground.

Now attending her fifth COP, “I have been here long enough to notice a few things. And I am no longer willing to write placating press releases that pretend everything is OK,” she said. “Year after year, you talk about running out of time. But for so many people gripped by devastating floods, fires, and storms, time is up. And instead of helping them, rich countries hold on to your dollars and hold up loss and damage.”

Negotiators “talk about inclusivity, and then developed and developing countries alike bicker over the few paltry words that enshrine human rights and the rights of Indigenous peoples in these talks. You delay just transitions for workers and communities. You systematically chip away at civil society space. You can’t even land a gender action plan,” she added. “You talk about urgency, but you can’t even decide when to decide what time period your future plans should cover. You talk about ambition, and then make plans to expand fossil fuel production and make your emissions everyone else’s problem.”

Best hope at COP 2019 China ” joint global effort… China will work with all sides … ”
When China builds compact ” capturing CO2 units” for trains, ships, power plants their will and industrial power will move others.