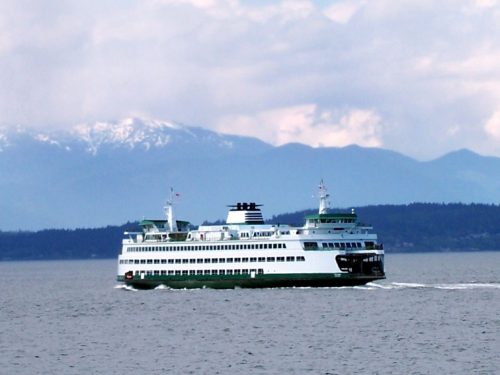 In Washington, the world’s second-largest ferry system is aiming to cut costs and eliminate 20 million gallons of diesel consumption per year across its fleet of 22 ships, which serve 25 million passengers per year, Greentech Media reports. Public Information Officer Ian Sterling said the ferry operator currently burn through fuel at the rate of a “midsize airline”, holds the distinction of being the state’s biggest diesel polluter, and is one of the public agencies slated to strive for zero emissions under legislation introduced by Gov. Jay Inslee.

But the decision to switch to batteries is “not just because the governor said it,” Sterling told Greentech. “This is a good idea because it quiets the boats [while] obviously removing tons of diesel fuel emissions. But even if you’re not an environmentalist, this is a good idea for the taxpayer because we expect it to pay for itself relatively quickly, based on the price of fuel. It saves millions of dollars annually.”

While some Washington State ferry riders will find themselves on electric-powered vessels “in the next couple of years,” Sterling added that it’ll take longer to electrify the whole fleet, due to challenges with charging infrastructure and electricity supply arrangements. So “the ferry operator’s electrification program will start with the most polluting vessels, three Jumbo Mark II ferries, which consume five million gallons of fuel a year between them and are soon due to have midlife propulsion system upgrades,” Greentech writes.

“As part of the upgrades, each vessel will have two of its four diesel generators and locomotive engines replaced with battery systems supplied by Siemens,” the U.S. industry publication adds. “Likely the first ship to undergo the conversion will be the MV Wenatchee, an iconic vessel that has appeared in TV series such as Grey’s Anatomy.”

Greentech places the Washington State retrofits within a larger trend that has ferry operators in B.C., Denmark, and the UK moving away from diesel propulsion. While BC Ferries initially opted for liquefied natural gas, Sterling said the company is now considering electrification.

More broadly, “ferry electrification is expected to continue growing in the future,” said Jostein Bogen, global product manager for energy storage and fuel cells at ABB Marine & Ports, citing data from the Maritime Battery Forum. “We are already seeing numerous cases of application across Scandinavian countries, and the technology has now started spreading to other parts of the world, as well.”

“The main drivers we see are global and local emissions regulations,” Bogen told Greentech, and “public opinion is becoming a strong driver. There is an increased awareness about the importance of sustainable maritime transportation, including ferries.”

In B.C., meanwhile, the Vancouver Courier reports that Harbour Air is set to test its short-haul electric plane on December 11.

“The Beaver seaplane is retrofitted with a 750 horsepower all-electric magni500 propulsion system,” the Courier writes. The company, which runs about 300 flights per day in B.C. and Washington State, says today’s electric technology is only suitable to carry its small planes on routes like the short run between Vancouver and Nanaimo.

Did Kenney Just Link the Moody’s Ratings Agency to His Anti-Alberta Conspiracy Theory?