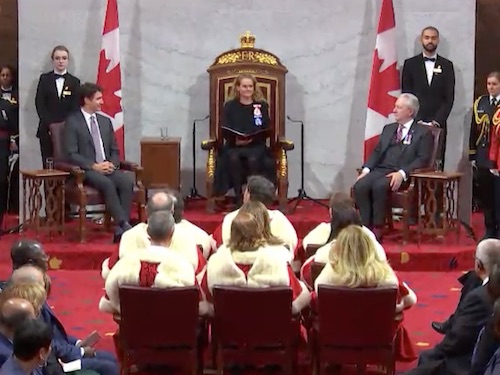 A 2050 deadline to achieve net-zero emissions, a price on carbon in every part of the country, and new initiatives on energy-efficient buildings, zero-emission vehicles, “clean, affordable power”, and climate change adaptation are major elements of the legislative program the incoming federal government laid out in the Speech from the Throne delivered in Ottawa yesterday by Governor General Julie Payette.

“A clear majority of Canadians voted for ambitious climate action now. And that is what the Government will deliver,” the GG stated. “From forest fires and floods, to ocean pollution and coastal erosion, Canadians are living the impact of climate change every day. The science is clear, and it has been for decades.” And “Canada’s children and grandchildren will judge this generation by its action—or inaction—on the defining challenge of the time.”

The climate section of the 28-minute Throne Speech largely repeated the Liberal government’s promises during the federal election earlier this fall, including its determination to complete construction of the contested and financially tenuous Trans Mountain pipeline expansion. “While the Government takes strong action to fight climate change, it will also work just as hard to get Canadian resources to new markets, and offer unwavering support to the hard-working women and men in Canada’s natural resources sectors, many of whom have faced tough times recently,” the speech stated.

Just a day before the Thursday afternoon speech, Environment and Climate Minister Jonathan Wilkinson said the government would adopt a tougher greenhouse gas reduction target for 2030 that would set it on a path to the more ambitious 2050 goal. “Part of what I am being charged to do over the next number of months is to look at what can we do from an ‘exceeds’ perspective, and what might that new number look like,” he told the Globe and Mail.

“As the government looks to set the bar higher, though, it still hasn’t explained how it will meet the current targets,” the Globe notes. “According to the government’s own numbers, the policies in place leave a 79-megatonne shortfall in the 30% reduction target. [Prime Minister Justin] Trudeau repeatedly maintained during the fall election campaign that his government would “meet and surpass” the target, without giving detail on how it would get there, and Mr. Wilkinson said that’s what he’s now tasked with figuring out.”

Climate Action Network-Canada (CAN-Rac) said the government has built a “solid foundation for climate action” over the last four years, but still has more work to do. “Getting to net zero by 2050 is going to take measurable, near-term goals, a stronger interim 2030 target, and accountability mechanisms to keep Canada on track,” said Executive Director Catherine Abreu.

“Today’s promises were important,” she added. “We need the federal government to provide more support for energy-efficient homes, zero-emission vehicles, and clean, affordable energy. We need government to invest in sustainable businesses, to provide money to people displaced by disasters, to reduce plastic pollution and commit to nature-based solutions. But all of these efforts must add up to a bigger picture, and we haven’t seen that bigger picture yet.”

In a “mandate letter” to Trudeau published last month, CAN-Rac called on the government to set science-based targets consistent with limiting average global warming to 1.5°C, create accountability mechanisms to keep Canada on track to meet its climate commitments, ensure a just transition for fossil workers and communities, redirect investment from fossils to renewable energy, phase out fossil subsidies, stop expanding fossil infrastructure, and fully implement the UN Declaration on the Rights of Indigenous Peoples.

“The next decade must necessarily be one of global transformation toward governance and economic systems that actually work for people and the planet,” the letter stated. “The next term of government will define Canada’s contribution to this era.”

(Trudeau’s actual mandate letters to his new cabinet are expected to be published today. So stay tuned…)

The Pembina Institute had much the same advice in a new action plan issued yesterday. “Canadians expect the parties to work together to create and implement strong climate policies that will result in a vibrant, 21st-century decarbonized economy,” the organization states. “Canada made huge strides forward with the creation of the first national climate plan in 2016, the Pan-Canadian Framework on Clean Growth and Climate Change,” but “will need to act quickly and decisively to build on this strong foundation if we are to meet our international climate commitments and prepare Canada to prosper in the 21st-century decarbonized economy.”

Earlier in the week, a group of 26 corporate executives along with trade unions and civil society organizations, all affiliated with the Smart Prosperity Leaders’ Initiative (SPLI), signed a letter to Trudeau and the provincial/territorial premiers, described by the Globe and Mail as “a to-do list to ensure Canada remains economically competitive while meeting its commitments to reduce greenhouse gas emissions” The group pointed to analysis last year showing the global potential for US$26 trillion in economic benefits and 65 million low-carbon jobs through 2030, in what the Global Commission on the Economy and Climate called a “use it or lose it moment”.

“We must ramp up our efforts, and focus on implementation to achieve real progress for a stronger, cleaner economy,” the letter said.

“We are going to lose the economic future of our country if we don’t take this trend seriously and create jobs and investment out of it,” added SPLI co-chair Annette Verschuren, chair and CEO of energy storage company NRStor Inc.

“The group represents a cross-section of Canadians, from youth and Indigenous leaders to Bay Street,” the Globe reports. “It’s calling on the federal and provincial governments to focus on issues such as green infrastructure, an agile and stringent regulatory system, policy certainty, tax reform to drive growth in cleantech, skills development, and transitioning workers affected by the changes.”

Although politicians of a particular partisan stripe are still vowing to fight the federal carbon tax in court, Shell Canada President Michael Crothers said he’s confident the issue can be depoliticized because that’s what people want. “In the end, governments have to listen to Canadians,” he told the Globe.

SPLI Co-Chair Stewart Elgie said the rancorous debate over climate change was settled in the federal election. “Having a partisan fight about a new direction is common,” he said. “But we need to get past that and then come together as a nation to tackle what is really the challenge and opportunity of our time.”