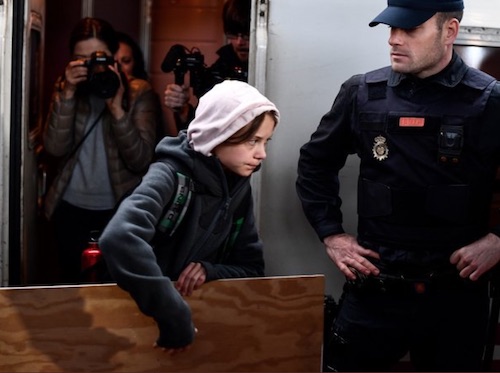 With negotiations at this year’s United Nations climate conference in Madrid, COP 25, reaching their midpoint, some delegates and observers are getting a sense of what Climate Home News calls “two worlds about to collide”.

Outside the conference hall, with #FridaysForFuture founder Greta Thunberg on hand for a youth and civil society protest beginning at 6:00 PM local time (from Atocha Railway Station, Prado Avenue if you’re in Madrid), this year’s COP is seeing public demand for immediate, decisive climate action that is larger, louder and more urgent than ever before.

Inside the COP, some observers tell The Energy Mix they’re seeing hints of new momentum. Issues like a just transition for fossil workers and communities are coming up in virtually every session. Concerns for Indigenous and other human rights are gaining a foothold in negotiations on international carbon credits. And some delegates from wealthy countries are even showing something more than an outright refusal to consider compensation for vulnerable countries facing down the most drastic impacts of the climate emergency.

And yet…but yet…there is zero chance that street protesters’ demands for firm, widespread national commitments to faster, deeper carbon cuts and climate adaptation measures will be finalized at this year’s COP.

That would be the logical outcome of the scientific agenda laid out in a succession of dire reports and analyses over the last year.

But it was never on the political agenda for a global gathering that was long intended as a catalyst for a breakthrough “moment” at COP 26 in 2020. COP veterans will explain that diplomatic negotiations never work any faster than that. Especially not when the stakes are high, the details are ferociously complex, and 195 countries with competing, often conflicting interests have to reach consensus.

“Talk to young people, or any of the new, emboldened breed of climate activists inspired by the young Swede, and there is an expectation these UN talks must be the moment we turn the tide on climate change.” But “that is a long way from the reality of climate diplomats, who know all too well the limitations of the process they inhabit,” writes Climate Home News. “Even with an extra push for countries to raise their climate targets in Madrid, a decisive COP 25 is a fantasy.”

The amped-up political pressure is producing “open talk of the UN climate process collapsing under the weight of expectations,” Climate Home reports. That’s largely because “this is the year the global conversation on the climate changed,” E3G Chair and Founding Director Tom Burke concludes in a Climate Home opinion piece. Driven not only by the protests, but by visible climate impacts “validating climate science experientially for people everywhere,” the demand for action “is now constant. Media coverage has broken out of the green ghetto. Climate deniers have returned to obscurity.”

The message: “What climate scientists said would happen is happening, only sooner and more dramatically than they previously thought. The technologies to free the global economy from fossil fuel dependence have also become competitive faster than anyone thought possible. They will become cheaper still in future.”

But none of that will translate automatically or easily into success, in Madrid this year or in Glasgow next. “Public support for forceful climate action is certainly rising, but there are few signs that the political will to act is also rising,” Burke observes. “The gap between what governments are doing about climate change and what they need to do is widening.”

The intense frustration of the moment is both inevitable and understandable, he adds. But “the peril is that this frustration will nourish the idea the [UN climate process] has failed to deliver, and that another way must be found for the world to protect the climate.” He says that would be a grave error, not least because “not everyone running this argument will be doing so in order to get more done about climate change. And none of those already running it have come up with anything better.”

The political risk facing the COP process itself calls for a clear-eyed focus on what the United Nations Framework Convention on Climate Change (UNFCCC) actually has the mandate or the ability to do, Burke advises. “The UNFCCC is not, and cannot be, some surrogate global legislative assembly,” he writes. “Its real world task is to keep enough alignment of the forces within and between countries that want to solve the problem for the real economy to make the transition to net zero. If we expect it to do more than it can, it will fail. If the UNFCCC fails, then we lose that alignment and everyone’s climate efforts go backwards.”

While next year’s COP in Glasgow will be a crucial moment, and an essential prompt for the UK government to walk its talk on climate transformation before assuming the COP presidency, “climate diplomacy happens in capitals, not negotiating rooms,” Burke concludes. “It will be conversations in capitals in the next few months that will shape the space for agreement in Glasgow. If this diplomatic effort is late, weak, or poorly focused, then the negotiations will run head on into those rising expectations.”

Alice Bell, co-director of the UK climate charity Possible, agrees that climate advocates have to be in it for the long haul. Looking back on the debacle of the 2009 UN climate conference and the resurrection of climate talks in Paris, and ahead to next year’s decisions in Glasgow, she says it’s “vital that [activists] keep this bubble going not just all the way until the Glasgow talks, but afterwards too.”

Typically, “climate politics is characterized by short bursts of activism heading towards short-term and often slightly arbitrary deadlines,” Bell writes for The Guardian. “We’ve been told again and again that the time is now, or at least within a few years, or the planet gets it.”

But much as the grassroot climate community is “tired of waiting” and “scared of the consequences of further inaction,” she says the “nature of the climate fight is that it’s one that will be with us for the long term, and so our activism has to be too. This is partly because we’ve left it so long that we have to deal with the warming we’ve already cooked up for ourselves as well as radical action to avoid more, but it’s also partly the nature of the beast. As climate scientist Kate Marvel neatly puts it, climate change isn’t a cliff you fall off at some particular stop on a thermometer or date in the calendar, it’s more a slope you slide down.”

That translates into a call for the climate movement to “build sustained, long-term relationships with the public rather than bubbles of activity, so that politicians can’t let it drop off their radar,” Bell concludes. “We also need to build resilience, including care of one another, and have strategies for long-term, sustained action. At the Paris talks, for example, some NGOs split teams between people who worked on the summit (who could then fall asleep in a heap at the close) and those ready to clean up after. This is the sort of approach that will keep us going.”

For this year, Spain’s minister for ecological transition, veteran climate negotiator Teresa Ribera, is being clear that she would rather see no results at all from two weeks of COP negotiations than to push through a poorly-framed decision. “Our biggest challenge is how to solve this the right way,” she told Bloomberg. “It is not viable to think that it’s so important to get this done that we can sacrifice everything else.”

Spain “is hopeful that an agreement will be reached that will tie up the last remaining details needed to implement the 2015 Paris Agreement,” the news agency adds, but “would rather have envoys from almost 200 countries come back empty-handed after two weeks of climate change talks than push through a bad deal.”

On the crucial and ferociously complicated Article 6 of the Paris Agreement, dealing with international carbon trading, Ribera stressed that there are broader guidelines that negotiators must follow.

“Any agreement will have to avoid the so-called double-counting in which reduction of emissions could be logged both by the polluter and the buyer of the credit,” Bloomberg writes, and “any deal must set out a carbon market structure that works, that’s attractive to investors and allows for more ambitious targets. Those features would help the mechanism give clear signals to developers about the value of their work, and to environmentalists that the trading measures produce genuine gains for the atmosphere.”

“No country can be tempted to say they want everything—and get angry if they don’t get it,” Ribera said. “There are some fundamental things for this to work, and it doesn’t make sense to accept it if it doesn’t work.”

Investors, too, are watching the talks closely, with some sense of what a workable international carbon market would look like. “I can’t go and tell people that have made business decisions in expectations of a stable [carbon] price around the €25 to €30 [per tonne] in the European Union that I’m suddenly going to flood the market and corrupt the system” by driving down prices, Ribera told the news agency.