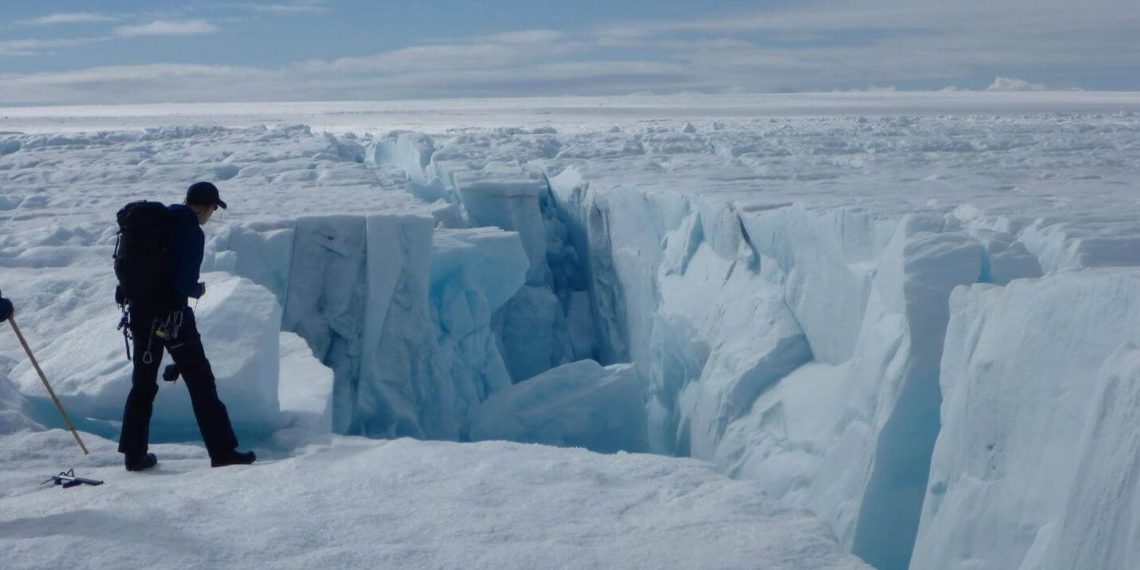 In a runaway effect, the Greenland ice melt lets surface water gurgle down to the bedrock – and at unexpected speeds.

LONDON, 6 December, 2019 – British scientists have caught a huge ice sheet in the act of draining away, with significant effects on its surroundings: they have seen what happens to the water created by the Greenland ice melt.

For the first time – and with help from drones – researchers have witnessed water flowing at a million cubic metres an hour from the surface of ice sheets through caverns in the ice and down to the glacial bedrock.

The study does not change the big picture of increasingly rapid melt as greenhouse gases build up in the atmosphere, and ever more of the northern hemisphere’s biggest ice cap flows downhill to raise global sea levels.

But it does throw light on the mechanisms by which glaciers turn to sea water, and it does suggest that many estimates of melt rate so far might prove to be under-estimates.

Greenland is the planet’s second largest ice sheet and the biggest single contributor to global sea level rise. Researchers have been alarmed for years about the increasing rate of summer melt and the accelerating speed of what had once been imperceptible glacial flows.

“These glaciers are already moving quite fast, so the effect of the lakes may not appear as dramatic as on slower-moving glaciers elsewhere, but the overall effect is in fact very significant”

And researchers from the universities of Cambridge, Aberystwyth and Lancaster have now been able to put a measure on water surface loss.

They report in the Proceedings of the National Academy of Sciences that they used custom-built aerial drones and complex computer modelling to work out how fractures form below vast lakes of meltwater that collect on the surface of the Store Glacier on the island’s northwestern sheet.

They watched splits form in the glacial ice, to suddenly open up an escape route for the supraglacial pool. As they watched, such fractures became caverns called moulins, down which in one case five million cubic metres of water – think of 2,000 Olympic swimming pools – flowed in just five hours.

The ice of the glacier is typically a kilometre thick, so the scientists may have observed the planet’s longest waterfall. And as the ice drained away to the bottom of the ice sheet, it may have served as a lubricant to speed up glacier flow over the bedrock.

The ice sheet lifted by half a metre, presumably in response to the sub-surface flood, and four kilometres downstream glacial speed picked up from a speed of two metres to more than five metres a day.

“It’s possible we’ve under-estimated the effects of these glaciers on the overall instability of the Greenland ice sheet. It’s a rare thing to observe these fast-draining lakes – we were lucky to be in the right place at the right time,” said Tom Chudley, of the Scott Polar Research Institute in Cambridge, one of the authors.

Until now, scientists have been able to estimate glacial flow and surface melt only by satellite studies – which reveal little of the detail – or direct on-the-ground measurement under conditions that are difficult even in good weather.

But even with these constraints researchers have been able to calculate the shrinkage of the Greenland ice sheet at the rate of a billion tonnes a day, as temperatures rise in response to ever-increasing use of fossil fuels around the globe.

The next step is to deploy drilling equipment for a closer look at how the water gets below the glacier to reach the bedrock, and calculate how the ice sheet may change not just over hours but over the coming decades as well.

“These glaciers are already moving quite fast, so the effect of the lakes may not appear as dramatic as on slower-moving glaciers elsewhere,” said Poul Christofferson, who led the project, “but the overall effect is in fact very significant.” – Climate News Network