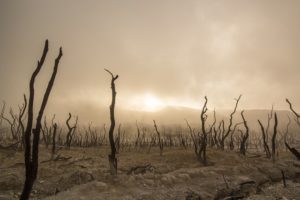 The 2010s are almost certain to take their place as the warmest decade on record, and 2015-2019 as the five-year span with the highest average temperatures ever, the World Meteorological Organization (WMO) reports, in a dire provisional statement released Tuesday at the beginning of this year’s United Nations climate negotiations in Madrid.

The UN agency’s statement on the State of the Global Climate warns that 2019 is on course to be the second- or third-warmest year since record-keeping began. The global average temperature from January to October, 2019 was about 1.1°C above pre-industrial levels, atmospheric carbon dioxide hit a record 407.8 parts per million, Arctic sea ice hit its second-lowest minimum in September, sea level rise accelerated, and “the ocean, which acts as a buffer by absorbing heat and carbon dioxide, is paying a heavy price. Ocean heat is at record levels and there have been widespread marine heat waves. Sea water is 26% more acidic than at the start of the industrial era. Vital marine ecosystems are being degraded.”

The WMO’s final assessment will be published in March, but the agency says this week’s release was intended to provide “an authoritative source of information” for negotiators in Madrid for COP 25.

“We are nowhere near on track to meet the Paris Agreement target,” said WMO Secretary-General Petteri Taalas. “If we do not take urgent climate action now, then we are heading for a temperature increase of more than 3.0°C by the end of the century, with ever more harmful impacts on human well-being.”

He added that “on a day-to-day basis, the impacts of climate change play out through extreme and ‘abnormal’ weather. And, once again in 2019, weather- and climate-related risks hit hard. Heat waves and floods which used to be ‘once in a century’ events are becoming more regular occurrences. Countries ranging from the Bahamas to Japan to Mozambique suffered the effect of devastating tropical cyclones. Wildfires swept through the Arctic and Australia.”

The release warns that “more than 90% of the excess energy accumulating in the climate system as a result of increased concentrations of greenhouse gases goes into the ocean”, with average warming in the upper 700 and 2,000 metres of the oceans “so far exceeding the previous record highs set in 2018.” With 1.5 months of unusually warm temperatures so far this year, marine heat waves in 38% of the ocean were classified as “strong”, another 28% as “moderate”, and heat levels in large parts of the northeast Pacific were designated “severe”.

While the world’s oceans helped to “attenuate” climate change by absorbing 22% of annual CO2 emissions between 2009 and 2018, the oceans are acidifying as a result—26% since the dawn of the Industrial Revolution, according to an IPCC special report issued earlier this year.

The WMO release traces the major flooding, drought, heat waves, wildfires, cyclones, health impacts, food security issues, and population displacements that have resulted in different parts of the world, noting that “the number of new displacements associated with weather extremes could more than triple to around 22 million by the end of 2019”. Oxfam notes that translates to one person forced out of their home every two seconds, every hour of every day of the year.

“A drumbeat of dire reports from climate science in the past year has fueled environmental activism, prompted some companies to commit to slashing emissions, and raised concerns among investors about the stability of asset prices,” Reuters writes, in its coverage of the WMO report. “Nevertheless, delegates in Madrid are facing an uphill battle to persuade major emitters to embrace the kind of radical change needed to shift the Earth’s climate system onto a more habitable trajectory.”