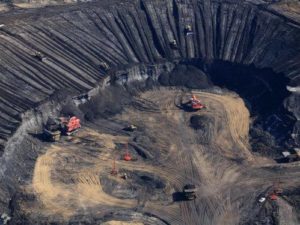 One of the world’s leading credit assessment agencies has downgraded its rating for Alberta, citing the province’s over-dependence on fossil fuels, lack of pipeline access, carbon intensity, and vulnerability to climate disasters.

And yet, almost simultaneous to the announcement by Moody’s Investors Service, the Canada Energy Regulator (CER) projected the country’s crude oil production will grow 50% through 2040. It’s a delusional expectation that would keep Alberta yoked to the fossil economy while cementing Canada’s international standing as a climate laggard—though the regulator apparently sees no need for new pipeline development over the next two decades.

The ratings downgrade—from Aa2 stable to Aa1 negative, for anyone keeping score—reflects the agency’s “opinion of a structural weakness in the provincial economy that remains concentrated and dependent on non-renewable resources…and remains pressured by a lack of sufficient pipeline capacity to transport oil efficiently, with no near-term expectation of a significant rebound in oil-related investments,” Moody’s wrote.

The agency also pointed to the continuing, deep spending cuts that Jason Kenney’s United Conservative Party (UCP) government will have to sustain to meet its 2022 target to balance its budget. “Moody’s notes that the province’s forecast of a cumulative 3% decline in operating expenses by 2022-23 is somewhat ambitious, which will require sustained political discipline,” the company said in a release. And “macroeconomic factors, which influence oil-related revenue growth and private sector investments in the oil sector, remain outside the control of the government.”

Mount Royal University political scientist Duane Bratt said Moody’s was reacting in part to the province’s looming battle with unions over a series of punishing job and budget cuts. But environmental risk was another factor in the downgrade.

“Alberta’s oil and gas sector is carbon intensive, and Alberta’s greenhouse gas emissions are the highest among provinces,” Moody’s wrote. “Alberta is also susceptible to natural disasters, including wildfires and floods, which could lead to significant mitigation costs by the province.”

Finance Minister Travis Toews was happy enough to blame the downgrade on the previous NDP government. But “the problem with that argument is the UCP already had an opportunity at producing a budget, and it obviously did not impress Moody’s, because the deficit went higher than the previous,” Bratt told CBC. The NDP opposition pointed to corporate tax cuts and the elimination of Alberta’s carbon tax as UCP decisions that ate into the province’s revenue and drove up its debt.

“The UCP debt is virtually the same as the NDP, but the difference is the UCP blew a hole in the budget, has no diversification plan, has presided over thousands of job losses with no end in sight,” finance critic and former environment minister Shannon Phillips said in a release.

University of Calgary economist Trevor Tombe said the downgrade was consistent with the importance of oil and gas in the provincial budget. “You know, until we can wean ourselves off of royalty revenues to fund government operations, we’re going to be exposed to reports like this anytime oil prices fall,” he told CBC.

That dependence on a boom-and-bust economy—and on an industry entering its twilight—didn’t stop the Canada Energy Regulator from forecasting that Canada’s crude oil production will grow nearly 50%, to about seven million barrels per day, by 2040, or that liquefied natural gas (LNG) will drive gas production up 30%, to more than 20 billion cubic feet per day, CBC reported last night. But the CER did apparently conclude that Canada will have no need for new pipelines over the next 20 years.

“Canadian oil pricing and production trends will rely heavily on the availability of export pipeline and rail capacity,” the regulator said in a release. “If approved pipeline projects (Trans Mountain, Keystone XL, Line 3) proceed as announced, along with continued volumes of crude by rail, there will be sufficient takeaway capacity to accommodate production growth over the next 20 years.”

Those gaps in the CER’s projections are part of a wider trend among established energy modelling agencies. In recent weeks, the International Energy Agency and the U.S. Energy Information Administration have both taken heavy criticism for publishing future growth projections for oil and gas that severely downplay the growth trajectory for renewables, disregard the impacts of climate-related regulation and investment decisions—and end up with rosy projections that become self-fulfilling prophecies by driving billions or trillions of dollars in short-term fossil investment.