Australia, Brazil, Japan Share Fossil of the Day (Dis)Honours as COP Negotiations Get Under Way 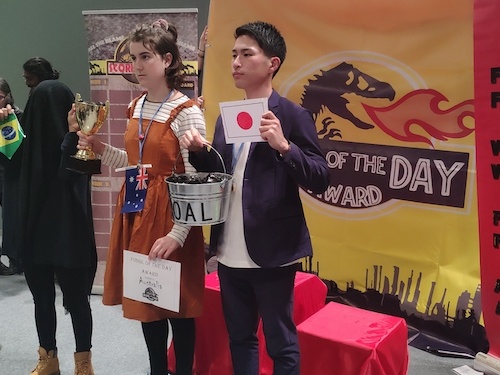 Australia, Brazil, and Japan found themselves in a three-way tie yesterday for Fossil of the Day, the coveted award from Climate Action Network-International for the country or institution that has done the most to obstruct progress at UN climate negotiations, taking place this year in Madrid.

“It’s a tie! Three countries managed to equally rank first at being the worst!” CAN reported yesterday, at the close of the first full day of negotiations. “Today’s fossil award goes to Australia, Brazil, and Japan. They managed to be as bad as each other!”

“Instead of taking responsible action on climate change, the Prime Minister made clear he was sending his thoughts and prayers to those who had suffered loss,” CAN writes. “The same day as fires busily destroyed people’s lives, Prime Minister Morrison went to a cricket game, and happily posed with cricketers tweeting: ‘Going to be a great summer of cricket, and for our firefighters and fire-impacted communities, I’m sure our boys will give them something to cheer for’.”

Japan won its share of the fossil award after Minister of Economy, Trade and Industry Hiroshi Kajiyama “completely ignored the science” in his response to a media question on the UN Environment Programme gap report—which warned that it’ll take a 7.6% annual reduction in greenhouse gas emissions to keep humanity on track to limit average global warming to 1.5°C.

Brazil earned its spot on the Fossil of the Day podium for showing up in Madrid with the message that it won’t participate in negotiations unless it receives compensation for burning down swaths of the Amazon rainforest, CAN says. More broadly, in the last 11 months, Brazil under President Jair Bolsonaro (who apparently takes great umbrage at his newfound international nickname, Capitão Motoserra”, or Captain Chainsaw) has “dismantled Brazil’s environmental governance, grounded enforcement agencies and frozen the world’s biggest REDD+ program, the celebrated Amazon Fund. The results have been an appalling increase in violence against Indigenous peoples, an unprecedented surge in illegal logging, and a 30% increase in deforestation this year—the highest in a decade. As a consequence, Brazil is sure to miss its 2020 deforestation reduction target and is totally off track on its NDC”—referring to its Nationally Determined Contribution, its official target under the Paris Agreement.

Over the weekend, the New York Times reported that Bolsonaro had falsely accused Hollywood actor Leonardo DiCaprio of paying to have the massive Amazon wildfires set, and that the World Wildlife Fund “had paid for images taken by volunteer firefighters that it then used to solicit donations, including a US$500,000 contribution from Mr. DiCaprio. The fund has denied receiving a donation from Mr. DiCaprio or obtaining photos from the firefighters.”

In the first Madrid edition of its daily COP newsletter, ECO, CAN-International says Brazil arrested four volunteer members of a youth fire brigade at gunpoint, accusing them of “lighting forest fires to profit from donations to extinguish them. Other NGOs were implicated, and one highly respected NGO in the same region had their computers and key documents confiscated by heavily armed policemen.”

When state Governor Helder Barbalho “realized his police force was putting him in an untenable position, he changed the command of the investigations, and the firefighters were released the next day,” CAN recounts. “No evidence to support the charges of setting fires has been produced, and other ongoing investigations have pointed to land-grabbers and real estate speculators as the main suspects for the fires.”

Meanwhile, the BBC reports that smoke particles from the last few months of Amazon wildfires have accelerated glacier melt in the Andes by “darkening” snow and ice. “Amazon deforestation and fires—events that occur mainly in Bolivia, Peru, and Brazil—cannot be considered a regional issue,” said Dr. Newton de Magalhães Neto of Rio de Janeiro State University in Brazil. “They have social implications at the continental scale, [because] accelerating the loss of glaciers increases the risk of a water crisis and the vulnerability of several Andean communities in response to climate change.”