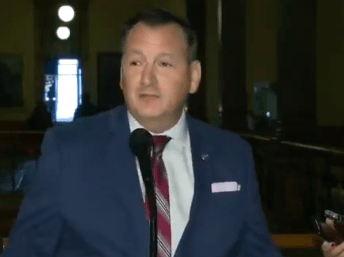 “This is Greg Rickford, Doug Ford’s Energy Minister,” tweeted @wearenorth99. “He used a blog with anti-climate change pseudo-science to justify shutting down renewable energy projects. Here he is running away from real journalists. He’d be really mad if you retweeted this.” [You know what to do.—Ed.]

“I believe in climate change, and I believe it’s as a consequence of human activity. Thank you for this,” Rickford told reporters, before retreating behind a closed door. The encounter was so short it was posted online as a repeating video.

“A story that should have lasted 1 day is now a headline 3rd day in a row,” tweeted @CityCynthia in response. “Energy Minister Rickford talks to media for seconds and abruptly leaves. (Never seen anything quite like this.) He’s been taking heat after citing a climate change denial blog in the legislature.”

The controversy broke after the opposition NDP discovered an obscure line item in a government report showing that provincial taxpayers would pay at least C$231 million for the cancelled contracts and projects. That was $231 million more than then-government house leader Todd Smith said the decision would cost, prompting the NDP to demand an independent audit.

“While [the Conservatives] were quite adamant that the auditor general should look at those numbers when the Liberals were in office, now that they’re in office they are trying to avoid the auditor general’s scrutiny,” Opposition leader Andrea Horwath said Monday. “People deserve to know how much this boondoggle is going to cost.”

Auditor General Bonnie Lysyk declined to get involved until she audits the government’s annual financial statements next March. But meanwhile, Rickford got himself in trouble in the provincial legislature, after citing a blog that denies humanity’s role in causing climate change to justify the decision to cancel the contracts. For two days running, he quoted an article claiming that rapid adoption of wind energy had made it difficult for Germany to maintain a stable electricity grid and control power prices.

[Pro tip: If you’re going to go after the Intergovernmental Panel on Climate Change, step one is to get its name right. For bonus points, try to check your facts before you…oh, right, a Breitbart-affiliated climate denial blog. Never mind.—Ed.]

CBC pointed to Rickford rallying climate denial in his own defence on the same day the UN Environment Programme released its annual Emissions Gap Report, which shows average global warming on track to hit 3.2°C in less than a century and calls for a 7.6% annual reduction in greenhouse gas emissions through 2030.

On Tuesday, Rickford refused to directly answer reporters’ questions about whether he “agrees with the suggestion that human activity is not contributing to climate change,” CBC wrote. He said it’s “important that you consider all periodicals and sources of literature with differing views….I believe in climate change and I believe in literature that supports a balanced article on any given subject matter that points out both sides of the coin.”

“I’m just shocked and disappointed that the person in charge of our energy system would be freely saying that a website that denies climate change is one of his favourites to read,” responded Ontario Green leader Mike Schreiner.