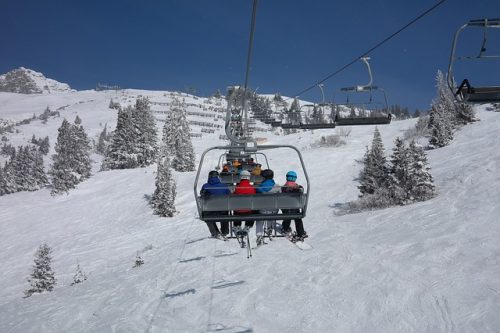 As more and more jurisdictions set 100% clean energy targets, machines that harness the constant force of gravity to store the intermittent energy of the sun and wind may soon join lithium-ion batteries and pumped hydro as essential tools in the carbon-free toolbox.

One such machine is the mountain gravity energy storage (MGES) system proposed by engineers from Austria’s International Institute for Applied Systems Analysis (IIASA), reports Utility Dive. Using a mechanism akin to a chair lift at a ski resort, the device would use renewable energy to haul massive, sand-filled containers to the top of a mountain, where it would then be stored as potential energy in the same way that water is held in pumped hydro stations. On demand, the sand-filled containers would be released “back down the mountain, propelled only by the force of gravity, generating electricity in the process”.

Another machine well beyond the prototype stage is the Swiss-produced Energy Vault, which “generates electricity through gravity by lowering concrete blocks in a tower.” Grist lyrically describes the Vault as “a Jenga-like tower made of concrete bricks, perpetually being assembled and destroyed by 400-foot tall puppeteering cranes.”

These technologies may well find a market niche, says Utility Dive, because while lithium-ion battery storage systems are likely to remain dominant, “the length of time that they can deploy energy—typically four hours or shorter—may not be long enough for the greater and greater amounts of solar and wind resources needed to come online to meet emissions reductions goals.”

“High-renewables grids, as mandated by many states, will require extremely long durations of storage, potentially on the order of 10 to 20 hours to shift variable solar power to cover nights and cloudy days, and weeks or even months to shift energy from high-wind months to lower-wind periods,” Wood Mackenzie head of energy storage Daniel Finn-Foley told Utility Dive. “Lithium-ion batteries ‘scale up poorly,’” the publication adds, “with costs effectively doubling every time the duration of a lithium-ion battery system doubles.”

What the MGES system will offer, say the authors of the IIASA study, is storage and deployment capacity similar to pumped hydro, which can store electricity indefinitely and deploy for anywhere six to 20 hours.

And MGES has none of pumped hydro’s liabilities: it isn’t limited by geography or high capital costs, or by basic hydraulic limitations that mean pumped hydro plants can’t push their height differential beyond 1,200 metres. By contrast, IIASA researcher Julian Hunt told Utility Dive, “MGES plants could have height differences of more than 5,000 metres.”

Improvements in lithium-ion technology are bringing eight-hour storage applications within reach, and many jurisdictions are still using fossil generation to fill the gaps between peak generation and short-term battery cycles—which would be the target function for MGES. Gravity storage may also find its niche on small islands that are “looking to run 100% renewable,” BloombergNEF energy storage analyst Yayoi Sekine told Utility Dive.