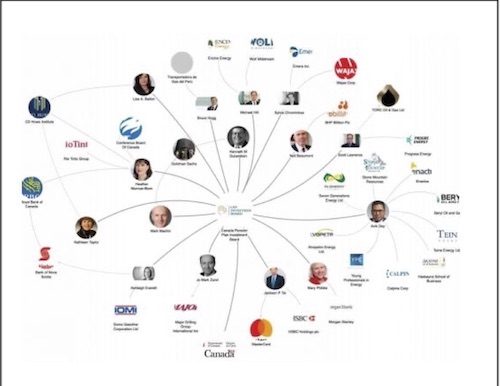 With more than C$4 billion invested in the world’s top 200 publicly-traded fossils, the Canada Pension Plan Investment Board (CPPIB) is placing bets that those companies will exceed the 1.5°C carbon emission targets in the Paris Agreement, according to a report released last week by the Corporate Mapping Project and the Canadian Centre for Policy Alternatives.

“How pension funds choose to invest has significant bearing on how we collectively address the climate emergency and the needed energy transition away from fossil fuels,” CCPA writes, and the CPPIB’s failure to get onboard “is a moral and ecological failure and also a financial risk”.

“As one of the largest investors in the country, they have a significant role to play in facilitating the needed energy transition and our report shows, unfortunately, they are not fulfilling that role at the moment,” report author James Rowe, associate professor in the University of Victoria School of Environmental Studies, told The Narwhal.

“To stay within 1.5°, these companies can extract only 71 billion tonnes of carbon dioxide, yet the companies the CPPIB is invested in have 281 billion tonnes in reserve, meaning they have almost four times the carbon reserves that can be sold and ultimately burned” within their carbon targets.

The report calls on the Board to conduct and disclose the results of a portfolio-wide climate risk analysis, urges the federal government to require all pension funds to fully disclose their fossil fuel holdings, and points to the influence of the fossil industry—including its interconnections with the CPPIB board—as a factor in its financial involvement in high-cost, high-carbon bitumen projects in the Alberta oilpatch.

“As we noted in the report, a number of board members of CPP are also board members of oil and gas companies, and so the interests of fossil fuel companies are influencing the decision making at the CPP,” Rowe said. “That is dangerous for Canadian pensioners.”

Speaking to National Observer, he added: “We’re not convinced that most Canadians realize that the Canada Pension Plan is pretty heavily invested in fossil fuel companies, when 60% of Canadians voted for parties with pretty strong climate plans. Canadians care about climate change, and so we think they would be interested in this information.”

Report co-author and Corporate Mapping Project research assistant Zoe Yunker said the overlapping directorships put the companies’ self-interest of companies at odds with the changes the climate crisis demands of investors and governments. “In Canada, the fossil fuel sector has been very successful at getting a seat at government decision-making tables, both provincially and federally, and CPPIB board directors and staff are entangled with the oil and gas industry,” she said.

The Narwhal notes that many of the Board’s investments are in coal, even though the federal government has made a 2030 coal phaseout a centrepiece of its climate action plan.

The overall picture of fossil investment makes the CPPIB—and future Canadian pensioners—vulnerable to the coming crash in the value of oil and gas stocks world-wide. “Those looking forward to collecting their pension should worry about the risk of stranded assets as the world transitions to renewable energy and financial institutions worldwide divest themselves of fossil fuel investments,” The Narwhal writes, citing the report.

“As energy generation shifts away from fossil fuels, investors who do not respond may find themselves left with ‘stranded assets’—investments that are no longer profitable—and Canada Pension Plan recipients would be collectively affected,” CCPA explains. “Worse still, is that their pension investments would continue to contribute to climate change rather than supporting measures committed to finding solutions.”

“Our worry is that Canadians, who rely on these funds for part of our retirement, are going to be affected by stranded asset risks,” Rowe told The Narwhal. “Oil and gas companies are facing a significant devaluation in the coming years and so it makes sense to move out now rather than later, which is what we see other institutions doing, but the CPP has not.”

Report co-author Steph Glanzmann, a recent forestry graduate from the University of British Columbia, added that investments in the fossil industry will no longer be profitable as a new generation shifts away from its products. “This is a moral and ecological failure and also a financial risk,” she said.

In an email to The Narwhal, a CPPIB spokesperson said the Board “has an ongoing goal to be a leader in understanding the risks and opportunities presented by climate change. The energy transition is under way, and as a long-term investor, we are mindful of these energy shifts and our portfolio reflects this.”

In what Observer describes as an “unattributed” response to the report, the CPPIB added that “by its very nature, any highly seasoned, professional board would have business backgrounds and expertise across asset management, insurance, telecommunications, food, manufacturing, real estate, retail, education, public policy, to only scratch the surface.”

It stated that, “beyond strong governance expertise, collectively understanding hundreds of sectors across a global portfolio is vital as fiduciaries. The premise one sector disproportionately influences one of the most diversified portfolios in the world is simply unfathomable.”

CPPIB said it participates in “collaborative engagements” to “press large GHG (greenhouse gas) emitters in oil and gas, utilities, and other sectors to improve disclosure related to GHG emissions, strategies and performance,” and “we will continue pressing for additional enhanced disclosure to better enable investors to assess the risks and opportunities presented by climate change.”