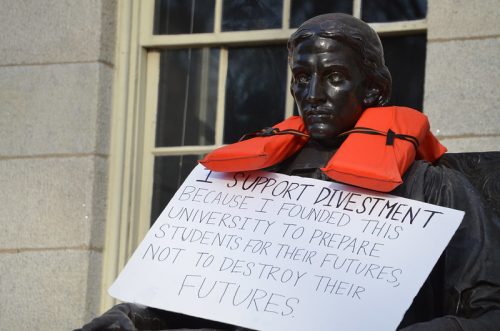 An estimated 500 climate protesters held up the annual Harvard-Yale football game for almost an hour Saturday, after swarming the field to demand the two universities pull their investments out of fossil fuels and forgive any debts they are owed by Puerto Rico.

“Players from both teams joined demonstrators on the field in a showstopping escalation of long-running campaigns,” the Washington Post reports. Protesters locked arms at the 50-yard line at the Yale Bowl in New Haven, Connecticut, chanted “OK, boomer”, and hosted banners declaring a climate emergency while police made 42 arrests and issued summonses for disorderly conduct.

“The protest quickly became a cause celebre among political figures, but its disruptive tactics were divisive,” the Post states. “A Yale spokesperson expressed disapproval of the interruption, while a Harvard representative said the school ‘respectfully disagree[d] with divestment activists’ over how to confront climate change.”

Die-hard football fans weren’t necessarily impressed with the display. “They’re all supposed to be intelligent people. It looks like there’s a lot of common sense that has missed their generation,” said 68-year-old Chuck Crummie, who attended the game with his son, a former player for Yale. “It goes to show that this generation is all about themselves and not a football game.”

But Fossil Free Yale spokesperson Sidney Carlson-White called the protest, which had been planned since August, “an absolutely thrilling experience, and we’re very excited about the support that it garnered from all over,” adding that “our education is funded at times by Puerto Rican debt, the fossil fuel industry ,and private prisons.”

Harvard football captain Wesley Ogsbury, a senior defensive back, agreed in a video released by Divest Harvard that Yale and Harvard are investing in industries that are “destroying our futures”, adding that “Harvard and Yale can’t claim to truly promote knowledge while at the same time supporting the companies engaged in misleading the public, smearing academics, and denying the truth.”

On the HEATED newsletter, veteran climate journalist Emily Atkin calls the protest “a remarkably successful act of civil disobedience. The interruption received widespread coverage from outlets like The New York Times, CNN, NPR, the Boston Globe, Rolling Stone, Vox, and TMZ—not to mention all the big sports networks. The protesters also grabbed the attention of the Democratic presidential field.”

“When people come together to stand up for justice, we win,” tweeted Sen. Bernie Sanders (I-VT). “From the March for Our Lives, to worldwide climate strikes, students and young people are leading the charge to protect their futures,” wrote Julián Castro, former housing and urban development secretary under President Barack Obama. “I’m inspired by their efforts to hold their universities to a higher standard.”

“These students have it right,” added billionaire activist and candidate Tom Steyer. “Nobody wins when we’re complicit in climate injustice. Institutions like Harvard and Yale must be leaders in the fight to address the climate crisis.”

After years of effort, divestment campaigners “have expressed impatience as school officials say true independence from fossil fuels is impossible to achieve and argue that they can use their positions as shareholders to sway companies’ practices,” the Post writes. “Harvard leaders have argued that the university should combat climate change through its research, despite dozens of U.S. schools’ decisions to divest and growing momentum at Harvard that extends beyond student activists.” Yale “has divested partially, but its chief investment officer David Swenson said last year that overhauling the university’s investment portfolio would be foolish because ‘we would all die’ if fossil fuel production stopped.”

“Universities like Harvard have a crucial role to play in tackling climate change and Harvard is fully committed to leadership in this area through research, education, community engagement, dramatically reducing its own carbon footprint, and using our campus as a test bed for piloting and proving solutions,” spokesperson Rachael Dane told the Harvard Crimson.

Ivy League spokesperson Matthew J. Planto was not impressed with the display, Atkin notes. “It is regrettable that the orchestrated protest came during a time when fellow students were participating in a collegiate career-defining contest and an annual tradition when thousands gather from around the world to enjoy and celebrate the storied traditions of both football programs and universities,” he said.

“In reality, though, interrupting a football game was probably the smartest thing the Ivy League protesters could have done,” Atkin says. “It was the most attention the cause of divestment has gotten in years.”