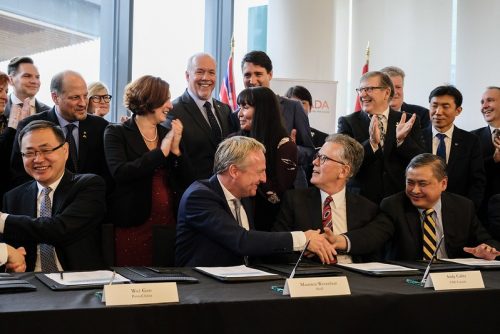 British Columbia paid out C$830 million in subsidies to help build its liquefied natural gas industry in 2017-18, according to a report released this week by the International Institute for Sustainable Development.

“Provincial fossil fuel subsidies undermine the CleanBC plan introduced by the government in 2018 and hold the province back from meeting its targets for greenhouse gas emissions reductions,” IISD states on the landing page for the report. Yet “new subsidies continue to be created, including significant support for the liquefied natural gas (LNG) industry.”

In their summary of the report, authors Vanessa Corkal and Philip Gass stress that the subsidies “promote the production and consumption of fuels that cause climate change. They encourage increases in the same pollution that other policies aim to reduce,” with the lion’s share of the provincial tax exemptions, royalty reductions, and direct investments going to fossil fuel producers.

“When fossil fuel producers receive hundreds of millions [in] subsidies each year, vital government resources are pulled away from important sectors such as renewable energy and social services,” they add. “This means that other sectors of the economy must compensate for the vast amounts of government revenue spent on subsidies—which is neither fair nor efficient.”

In a study last week, the Canadian Centre for Policy Alternatives put the value of foregone tax credits at $485 million in 2017 and $703 million in 2018, The Narwhal reports.

IISD also points to B.C. and Canada creating new LNG subsidies that “tip the scales in favour of fossil fuels, rather than the sustainable energy that’s required for the future”.

Several other Canadian climate groups chimed in after IISD released its report. In its own backgrounder, Toronto-based Environmental Defence notes that B.C.’s special treatment for its LNG industry includes “everything from direct investments in the companies, paying for roads and electricity infrastructure, interest-free loans on construction costs, special treatment under the province’s carbon tax, and providing the companies with discounted electricity prices.”

Stand.earth points to the contradiction between the subsidies and British Columbia’s green mystique. “Despite holding the reputation for being one of the most environmentally friendly provinces in Canada, these subsidies and royalty credits make B.C. the second-highest provider of fossil fuel subsidies among Canada’s provinces and territories, second only to Alberta,” the Vancouver-based campaign organization states in a release.

“The fact that subsidies and royalty credits to fossil fuel companies have increased under this government is shocking,” said International Program Director Tzeporah Berman. “At this moment in history, why would we be handing the province’s biggest polluters millions of taxpayers’ dollars—instead of putting that money towards housing or education or other cleaner industries? If this government is serious about climate change and building a clean economy, they will end these subsidies before the next election.”

“It’s dangerously misleading that a province trying to be a leader in addressing climate change is still one of the country’s top supporters of the fossil fuel industry,” agreed Sierra Club BC. “We’ve applauded the B.C. government for introducing CleanBC and the Climate Change Accountability Act as crucial, much-needed steps to address the climate crisis. But without ensuring the legislation includes regular reviews to bring B.C.’s climate targets in line with the science, and without shifting subsidies away from fossil fuels, B.C.’s actions will lock families into facing even worse climate risks.”