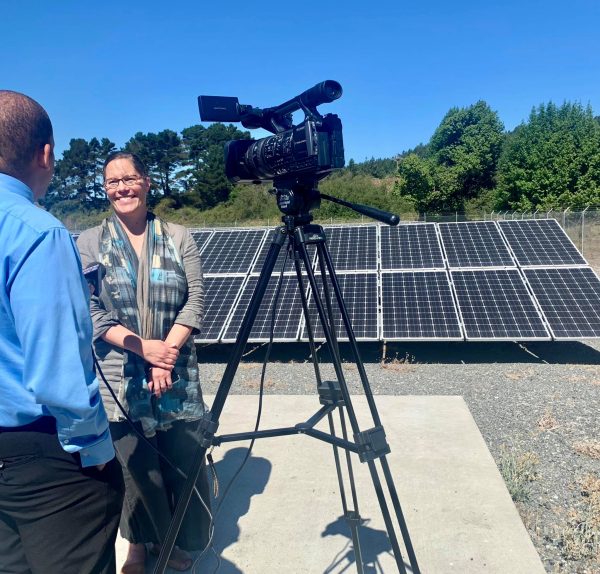 The Blue Lake Rancheria is receiving direct credit for saving four people whose lives depend on medical devices that require electricity to function, Microgrid Knowledge reports. The tribal system ultimately served 10% of the population of Humboldt Country, or about 10,000 people, during the three-day shutdown.

Part of a 76-acre reservation, Blue Lake Rancheria took a big step toward its 2030 target for zero net carbon dioxide emissions when it installed and began operating a 430-kilowatt solar photovoltaic array in 2017, along with a 500-kW, 2-kWh Tesla battery storage system complemented by two legacy diesel generators with a combined capacity of 1.8 megawatts.

“During normal times, the microgrid serves its intended role,” Microgrid Knowledge states, reducing the tribe’s GHG emissions by about 175 tons and its energy costs by about US$195,000 in its first year of operation.

But where the microgrid “really shone, and not just for the tribe” was during the PG&E preventive shutdown. In addition to literally saving four lives, the Rancheria offered access to people needing to charge cell phones or EVs, even powering a mobile office for Humboldt’s daily newspaper.

“And, knowing it would have the microgrid to rely on, the tribe was able to strategize in order to provide the reservation’s gas station with power from its backup diesel generators, as well as provide fuel for services outside the reservation such as the town of Blue Lakes’ municipal water system and to the Mad River Fish Hatchery so it could keep pumps running to keep fish hatchlings alive.”

The microgrid’s owners have ambitious plans to add “another 500 kW of solar power and a 634-kW, 1,014-kWh battery storage system” by March, hoping to use the expanded battery storage capacity “as a resource in the competitive wholesale power market run by the California Independent System Operator, and to eventually move away from using its diesel engines as a source of backup power,” Microgrid Knowledge notes.

Jana Ganion, director of sustainability and government affairs at Blue Lake Rancheria, pointed to the area’s many lumber mills, both functioning and not, which “could be good locations for microgrids that could provide regional resiliency.” Meanwhile, the California Public Utilities Commission has launched a formal investigation into how PG&E and two other Californian utilities “complied with regulations before, during, and after their de-energization (PSPS) events,” Utility Dive reports. Concerned for the well-being of vulnerable people, like the ones whose lives were saved by the Rancheria microgrid, CPUC President Marybel Batjer stressed that “these sustained PSPS events cannot be the new normal for California.”