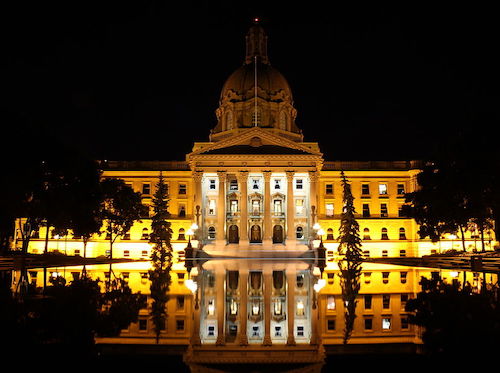 Jason Kenney’s United Conservative Party government is taking fire from one of the province’s most established philanthropic institutions, with the Edmonton-based Muttart Foundation declaring that Alberta’s inquiry into supposed foreign funding of anti-fossil advocacy is polarizing, undemocratic, and unfounded.

The Public Inquiry Into Funding of Anti-Alberta Energy Campaigns is creating a “climate of fear” that there is a price to be paid for disagreeing with the government, Muttart writes in a 174-page letter to inquiry commissioner Steve Allan. It adds that the order creating the commission “construes criticism of the oil and gas industry—or, depending on one’s perspective, concern about the environment—as ‘anti-Alberta’.”

“Surely, in a democracy as lively and as firmly entrenched as that of Alberta, it cannot be anti-Alberta or ‘unAlbertan’ to engage in serious debate about significant issues,” the foundation adds. “Disagreeing with government or with those involved in the [fossil] energy industry is not evidence of wrongdoing. It is simply what happens in a free and democratic society.”

The submission to Allan “acknowledges that any misinformation needs to be called out,” The Canadian Press reports, but “adds that the inquiry’s terms of reference seem to deliberately single out criticism of the province’s energy industry and seem to suggest that its findings could affect provincial grant and support programs.”

Even implying “that support of the energy industry or even agreement with government could become a criterion for determining whether an organization receives funding comes, we suggest, dangerously close to government direction of speech and thought,” the letter says.

The foundation also demolished the rationale for the inquiry—the discredited conspiracy theory from pro-fossil provocateur Vivian Krause that environmental charities have received foreign funding to take down the domestic fossil industry. Citing Canada Revenue Agency figures, Muttart says foreign funding accounted for less than 1% of the revenue to charities across Canada in 2016, and less than 3% in Alberta. Within the province, “the University of Calgary was the top recipient, raking in 42% of all foreign funding in Alberta,” CP writes.

“The rest of the Top 10 were four other post-secondary institutions, three religious charities, an international development charity, and an arts organization,” the news agency adds. “More religious charities received foreign funding than any other type. Environmental charities ranked last out of nine.”

Allan was also under fire last week for shelling out C$905,000 for legal advice in a sole-source contract with Dentons, the Calgary firm that employs his son. The contract consumes nearly 40% of the inquiry’s $2.5-million budget, CBC reports.

“Even if his son doesn’t financially profit from it, it is his son’s company and it is a clear conflict of interest,” said Democracy Watch co-founder Duff Conacher. Allan “should not have taken part in any decision to hand a contract to Dentons.”

CBC says Allan has not commented on the contract. In an emailed statement the commission said: “The commissioner, per the Terms of Reference which authorize his retention of such resources, selected these firms to provide expert legal counsel and supporting accounting advice to assist him in fulfilling his mandate.”

After the province’s NDP opposition asked Ethics Commissioner Marguerite Trussier to investigate the contract, Trussier said she had no jurisdiction to do so, since Allan is not considered a designated office-holder under the provincial Public Service Act. CBC also reports that Allan was donor to the UCP leadership campaign of Justice Minister Doug Schweitzer, a former partner at Dentons.

“Any reasonable person would question how [Allan] can be seen to impartially judge allegations the UCP, Premier Kenney, and Minister Schweitzer have made against the environmental organizations the inquiry targets,” said Ecojustice lawyer Barry Robinson. “This is in addition to the fact that the inquiry’s terms of reference also raise fundamental questions of fairness and rights to freedom of speech and freedom of association.”

The UCP also faced criticism last week after Kenney Principal Advisor David Knight-Legg spent more than $45,000 on what the Star Edmonton characterizes as “fancy hotels and meals” on four recent trips to London, UK. A government spokesperson said Knight-Legg was working to draw capital investment to Alberta and counter the “misinformation campaign of defamation” supposedly confronting the province’s fossil sector.

The continuing hardball politics had a former provincial Conservative politician and at least one news commentator urging Kenney to tone things down.

“How many booms and busts does it take for a Conservative government, in power for 44 years, to acknowledge they have failed to both recognize the need for alternate markets for our oil, more economic diversity, and a science-based response to climate warming with stimulus for clean energy, energy conservation, and efficiency programs?” asks David Swann, who served as a provincial Conservative MLA for 11 years, in an Edmonton Journal opinion piece.

“This is not the time to double down on fossil fuel stimulus, investment, and subsidies. Nor is [it time for] blaming the federal government (in power for just over one term) for the lack of pipelines,” he writes. “It’s time to face the truth. We are an oil state, with all its advantages, entitlements, hubris, and decades of quid pro quo between the oil industry and the people in power, neglecting Alberta’s long-term well-being.

“The world is changing. Canada is changing. Alberta is in danger of becoming the Don Cherry of Canadian politics, unable to deal with change,” adds Graham Thomson on CBC. Rather than rattling sabres at Ottawa and engaging in public battles with Quebec, “Kenney needs to learn a new language. He needs to know how to talk about the environment.”

Late last week, Kenney’s public pronouncements centred on the February, 2019 Redwater decision, in which the Supreme Court of Canada determined that bankrupt fossils must bear responsibility for cleaning up the production sites they leave behind.

Analysts warned at the time that the ruling could make it tougher for oil and gas developers to secure credit, with Moody’s Investors Service casting the decision as “credit negative for these companies and for banks”. Nine months later, Kenney says the ruling is hurting the oil well drilling sector, and his government is working to address it.

“We also will be focusing in the next few weeks on doing everything we possibly can to mitigate the unintended consequences of the Redwater decision, which has done so much to restrict access to both capital and credit, equity and credit, for this industry,” he told a Calgary luncheon hosted by the Canadian Association of Oilwell Drilling Contractors. (CAODC) “The good thing about Redwater is it does ensure that the public is protected to a greater extent—you want to keep that,” said CAODC President Tristan Goodman. “At the same time, you need to find other vehicles to ensure financing of a product that everybody is still demanding can occur. Otherwise, we’re gonna be getting this product from external sources rather than our own domestic supply.”