Absence of Other Choices Drives Indigenous Role in Oil and Gas 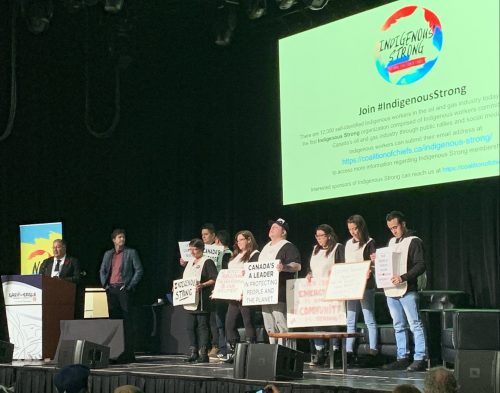 The potent power of oil and gas is dividing Indigenous communities in western Canada, with one side championing the industry as the only available path away from poverty, while the other condemns it as a neocolonialist destroyer of Indigenous values and the global climate.

Determined to work with the oil and gas sector, reports National Observer, are people like Dale Swampy, president of the National Coalition of Chiefs (NCC), an organization whose stated mandate is to “defeat on-reserve poverty” by advocating for oil and gas development on or near Indigenous communities.

To this end, the NCC recently invited more than 80 Indigenous leaders from across Canada, and many more industry representatives, to a natural resources summit in Tsuut’ina First Nation, on the outskirts of Calgary.

Speakers included Chief Roy Jones Jr. who, notes the Observer, “was a Haida hereditary chief before his status was revoked in 2016 by the matriarchs of his community for supporting the Northern Gateway Pipeline,” and Delbert Wapass, former chief of the Thunderchild First Nation in Saskatchewan and founder of Project Reconciliation, which supports Indigenous ownership of the Trans Mountain Pipeline.

“We are getting louder now because we are getting tired of a small minority of activists and protesters speaking for all First Nations,” Swampy said. Asserting that “the [fossil] energy industry is an important source of jobs and revenues for many First Nations,” he added that “we want to change the conversation about natural resource development. For many of us, this is the best, even the only, pathway to meaningful economic development and defeating on-reserve poverty.”

Anxious to support its Indigenous allies, the Kenney government created the Alberta Indigenous Opportunities Corporation, a Crown entity “which over the next four years will have C$1 billion allotted from provincial funds to ‘facilitate investment by Indigenous groups in natural resource projects and related infrastructure’,” Observer writes.

The province is also setting up a $10-million Indigenous litigation fund to “support Indigenous voices in legal actions that affect responsible resource development in Alberta.”

Eriel Deranger, a member of Athabasca Chipewyan First Nation and executive director of Indigenous Climate Action, has a succinct response to organizations like NCC. “It’s disappointing that the Indigenous identity is being leveraged in a way to promote these things that are really counterintuitive to a lot of the positions that our communities have taken for decades,” she told Observer. She added that support for oil and gas—especially given the climate impacts it brings to Indigenous people—is a side effect of colonization and the “erasure of Indigenous values and knowledge system”.

To truly honour Indigenous rights, Deranger said, “there should be reparations for the losses that we’ve incurred — not us brokering deals for future royalties or incentives from the success of these projects.” The gap between that vision and the emerging Indigenous role in the fossil industry shows that “these so-called leaders and chiefs in our communities have got it backwards,” she said.

Swampy responded that “resource development leads to self-determination and own-source-revenues that provide us with the capacity to support our own languages, our own schools, our own cultural programs, and services for Elders.” He added: “Poverty is not an Indigenous value.”

Indigenous rights advocate Michelle Robinson of Calgary, part of the second generation in her family to work in oil and gas, said an absence of options is the main driver behind recent Indigenous alliances with Big Oil.

“We’re going to have imposed fossil fuels and imposed Canadian governance—like we’re handcuffed no matter what,” she told Observer. “So the decision is to either beat them or join them, and a lot of folks already have skill sets to just join it. So from an economic point of view, of course, it’s a smart thing to do, because a lot of times we just don’t get choice.”