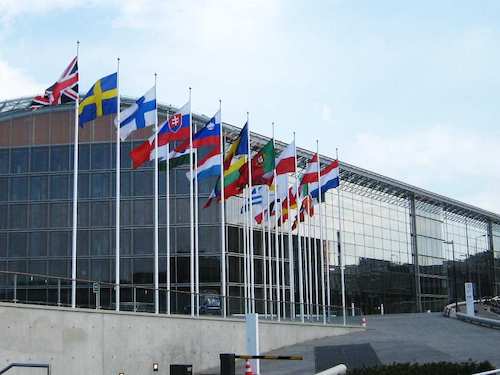 In a blockbuster announcement yesterday, the European Investment Bank pledged to end most or all of its financing for fossil energy projects by the end of 2021 and devote future financing to “accelerate clean energy innovation, energy efficiency, and renewables,” a move it says will “unlock €1 trillion of climate action and environmental sustainable investment in the decade to 2030.”

The decision by the board of the EIB, the world’s biggest multilateral lender, confirmed the agency’s commitment to “increased ambition in climate action and environmental sustainability,” and includes a promise to align all its financing activity with the goals of the Paris Agreement by the end of 2020, the bank said in a release.

In line with the €1-trillion target, it said the bank “will gradually increase the share of its financing dedicated to climate action and environmental sustainability to reach 50% of its operations in 2025, and from then on.”

“Climate is the top issue on the political agenda of our time,” said EIB President Werner Hoyer. “The EU bank has been Europe’s climate bank for many years. Today it has decided to make a quantum leap in its ambition. We will stop financing fossil fuels and we will launch the most ambitious climate investment strategy of any public financial institution anywhere.”

Hoyer cited scientists’ estimate that humanity is “currently heading for 3.0 to 4.0°C of temperature increase by the end of the century. If that happens, large portions of our planet will become uninhabitable, with disastrous consequences for people around the world.” Instead, he said the EIB will work with other European institutions and the private sector “to support a climate-neutral European economy by 2050”.

“The EIB’s ambitious energy lending policy adopted today is a crucial milestone in the fight against global warming,” said Andrew McDowell, the bank’s vice-president in charge of energy. “Following a long discussion, we have reached a compromise to end the financing by the EU bank of unabated fossil fuel projects, including gas, from the end of 2021.”

The new policy calls for the EIB to prioritize energy efficiency, support energy decarbonization, increase financing for decentralized energy production, energy storage, and e-mobility, support grid investments in wind, solar, and cross-border interconnections, and support energy transformation outside the EU. It also reduces the bank’s emissions performance standard from 550 to 250 grams of carbon dioxide per kilowatt-hour, and stresses a just transition for the 10 EU countries that face “specific energy investment challenges”. For those countries, the release says the EIB will work with the European Commission to support a just transition fund and cover 75% of eligible project costs for new energy investments.

Emma Navarro, the EIB vice-president responsible for climate action and environment, noted the timing of the decision, just two weeks before this year’s United Nations climate conference convenes in Madrid. “These decisions send an important signal to the world,” she said, adding that the EIB will “mobilize investments on an unprecedented scale to support climate action projects around the world”.

350.org and Oil Change International welcomed the announcement, with some reservations.

“When the world’s biggest public lender decides to largely ditch fossil fuels, financial markets across the globe will take notice: this is the beginning of the end of climate-wrecking fossil fuel finance,” said 350 Germany Campaigner Kate Cahoon.

“The gas lobby has unfortunately managed to get Germany and the European Commission to insert some loopholes into the policy, which leave the door open for funding of dangerous fossil gas projects,” she added. “They had better take note of the growing list of pipelines, terminals, and fracking wells that are scrapped thanks to local opposition and the unprecedented masses of people mobilizing for climate justice.”

“This decision is a result for the tens of thousands of people around the world who have put pressure on the EIB to recognize it must go fossil-free, as well as for the local groups across Europe who have been regularly protesting outside finance ministries and EIB offices,” 350 adds. The announcement “comes amid growing pressure on financial institutions to cut their exposure to high-carbon projects, and a collective move by Multilateral Development Banks to align their funding with the Paris Agreement.”

“This new policy is a signal to the wider financial community that the era of fossil fuels is past,” agreed Oil Change Lead Analyst Alex Doukas. “The policy approved today positions the EIB ahead of its peers by starting from the assumption that new fossil fuel infrastructure is not acceptable if we are serious about fighting climate change. But it is weaker than the original proposal as a result of blockers like Germany and the European Commission, who pushed for fossil gas loopholes.”