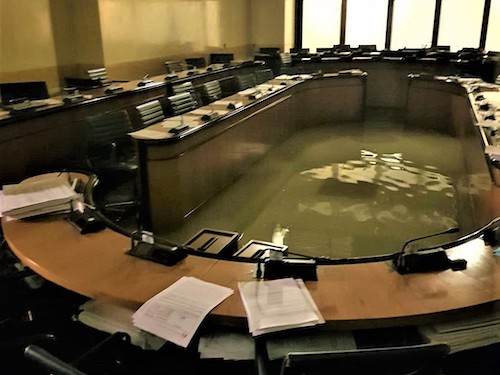 Eighteen months before Venice’s state-of-the-art flood barrier is scheduled to be complete and operational, the so-called “Floating City” is drowning, submerged this week under the second-highest climate change-driven tidal floodwaters on record.

After “tides from the lagoon reached more than six feet higher than their usual level,” surging across “more than 80% of the city’s surface,” reports CityLab, two people are dead, and experts fear for the long-term survival of centuries-old and revered spaces like St. Mark’s Basilica and La Fenice Opera House.

And in a memorable but horrible moment, the Veneto regional council chamber on Venice’s Grand Canal was flooded for the first time ever, just after elected officials voted down a 2020 budget measure to fight climate change, CNN reports. “Ironically, the chamber was flooded two minutes after the majority League, Brothers of Italy, and Forza Italia parties rejected our amendments to tackle climate change,” wrote Democratic Party councillor Andrea Zanoni, deputy chair of the region’s environment committee.

“Among the rejected amendments were measures to fund renewable sources, to replace diesel buses with ‘more efficient and less polluting ones,’ to scrap polluting stoves, and reduce the impact of plastics,” CNN writes. “Zanoni went on to accuse Veneto regional president Luca Zaia, who is a member of Matteo Salvini’s far-right League Party, of presenting a budget ‘with no concrete actions to combat climate change’.”

Contributing to the devastating submergence of La Serenissima is its slow subsidence. “The city has sunk about 23 centimetres over the past century, a process exacerbated by erosion from cruise ship traffic,” writes CityLab, citing evidence that the waves produced by the massive floating hotels as they come and go are eroding the very foundations upon which the city rests. The Washington Post attributes the subsidence to “the result of tectonic plates shifting below the Italian coast”.

But almost certainly the larger culprit, identified by Venice’s mayor in an impassioned plea to Rome for help, is climate change.

While “the Northern Adriatic has always been vulnerable to high water in autumn and winter, when astronomical tides are reinforced by prevailing seasonal winds,” notes CityLab, rising sea levels have meant that “out of the 20 highest recorded tides, five have been in the past 10 years, with one of those occurring in 2018.”

Including this week, “St. Mark’s has only been flooded six times in its 1,200-year history,” the publication adds. “Three of those floods have been in the last 20 years.”

And while the City of Light, a UNESCO World Heritage Site, is “reasonably well habituated to more moderate occurrences of seasonal acqua alta [high water],” CityLab says the increasing severity and frequency of major tidal flooding “is doing long-term structural damage to buildings that are centuries old”. Citing Venice University restoration professor Mario Piana, the news report points to salt residues from the receding Adriatic as the most destructive force on everything from precious mosaics to essential structural columns.

Most frustrating of all is that the MOSE flood barrier, “Venice’s moonshot bid for survival in a warmed world,” is finally nearing completion, CityLab notes. Launched in 2003 with an initial cost estimate of US$6 billion, the project’s progress has been “slow, rocky, and dysfunctional,” attended by charges of graft at the mayoral level. It has also faced a host of technical challenges, including the possibility, revealed this summer, “that some of the materials used were already degraded and damaged by water, and would need repairing before they had even come into service”.