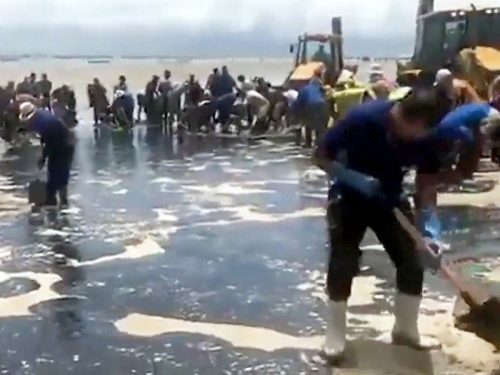 The oil came by stealth—lurking below the Atlantic waves so that neither humans nor satellites detected a plume. By the time the oil was spotted, a month after the original spill or leak, it was virtually impossible to contain with floating booms. First a few beaches were hit. Then a dozen. Then dozens more, then hundreds.

At last count, almost 300 beaches and a Brazilian coastline 2,500 kilometres long have been defiled. Damage estimates are in the billions. Tourism has been hit hard, along with commercial fisheries and community shellfish harvesting. A key marine sanctuary protecting corals and humpback whales was caught in the crude’s path.

It is by far the worst oil spill in Brazil’s history, and may have put in jeopardy the country’s own plans to develop gigantic offshore projects. The military belatedly dispatched troops to help with beach clean-ups, to little avail. Federal prosecutors were enlisted to find the cause, nail those responsible, and seek restitution.

No crippled or sunken ship has been found. The hit-and-run oil tanker left the scene months ago. The owner of one Greek-flagged ship identified by Brazil prosecutors as a prime suspect has flatly denied all responsibility. Four others are under suspicion, but the more investigators search, the more the tragedy morphs into a murky montage worthy of a political espionage novel.

But one fact is certain: Three different Brazil labs have examined the molecular DNA of the oil globs and concluded they comprise Venezuelan tar sands/oil sands crude and a diluent to allow the molasses-like substance to be pumped through pipelines and into oil tankers. This is consistent with the lack of surface oil slicks off the Brazil coast, the presence of high amounts of sulphur and vanadium, and toxic reactions volunteer beach cleaning crews have suffered.

If this tragic picture from faraway Brazil triggers a foreboding chill for those living in the Salish Sea marine gateway shared by southern coastal British Columbia and Washington State, it should.

Because each year, for the next 50 years, the expanded Trans Mountain pipeline from the Alberta tar sands/oil sands to a marine terminal in Burnaby is slated to pump some 215 million barrels of chemically similar “dilbit” into Asia-bound oil tankers. That would cumulatively total one billion barrels passing under Vancouver’s Lion’s Gate Bridge, then to the Pacific via the Strait of Juan de Fuca.

Now consider this: the known damage to Brazil’s 2,500-kilometre coastline has been caused by only 28,000 barrels (4,000 tonnes) of fugitive Venezuela heavy crude.

For starters, the captain and crew of whatever oil tanker was responsible left without alerting any Brazil authorities. It took a month for the Venezuelan heavy crude to reach the beaches, so even an anonymous warning could have advanced protective measures. Such brazen negligence amounts to criminality under marine law.

Secondly, the relatively small volume of escaped oil (less than 1% of a fully-loaded Suezmax tanker) indicates there was an unintended leak that was capped, or that an attempted mid-ocean transfer to another ship went awry. This may have been attempted because Venezuela oil exports face stiff U.S.-led global sanctions, and ship-to-ship transfers can hide the origin and destination of a “hot” cargo. Similar oil tanker subterfuges are routinely used by Iran to evade sanctions and detection, and by China to supply North Korea.

Venezuela has an obvious motive for risking such tactics—oil is its only export capable of either earning hard currency or paying down crippling state debts. Formerly formidable oil sales to U.S. refineries have dwindled to a trickle, and the Trump administration has vowed to punish other countries which accept shipments from Venezuela’s gigantic deposits of both high-grade reserves and inferior-quality tar sands/oil sands.

As the sanctions bite deeper and deeper, the misery index of most Venezuelans has climbed, the Maduro regime has teetered, and oil production has dropped like a stone due to the lack of money, refinery parts, and skilled technicians. Countries like China, Russia, and India have lent billions to revive oil production there in exchange for joint ownership stakes and pledges of quality oil. But this has proven futile. As a last, desperate tactic, Venezuela’s state oil company recently configured the sector to maximize low-grade tar sands/oil sands output and sell it in an unrefined form at a price which can undercut global competitors.

But oil traders or countries which do so risk being caught by Washington, then punished or barred from trading commodities in the United States. For China and Russia, which could lose the billions they’ve ploughed into Venezuela, recouping whatever they can from oil shipments will limit their losses.

So they use “cut-outs” to charter oil tankers that get pumped full of dirt-cheap or loan-offsetting Venezuelan tar sands/oil sands crude, then make the cargos vanish by changing bills of lading or transferring the oil to other “ghost ships” at sea. Then the oil arrives with false certification at a specified port with nearby refineries designed to process the crudest of all crude. Because it comes cheap, that gives those refiners a competitive edge.

Based on search warrants, Interpol filings, and formal requests to specific shipping companies, Brazilian prosecutors believe this subterfuge was in play preceding the oil spill. The molecular signature proves the crude is from Venezuelan tar sands/oil sands, and was blended with some higher-quality oil to produce the Merey 16 blend. That ended up on coastal beaches as crumbly black sludge and pools of stiff tar. Their reported prime suspect is a Greek-flagged Suezmax tanker called the Bouboulina.

Manifests and satellite tracking records show that ship left Venezuela’s main oil port with an estimated one million barrels in July, made a puzzling stop in Trinidad and Tobago for only a few hours, then chugged down the coast of South America near northeast Brazil en route to Malaysia. There, a ship-to-ship oil transfer was apparently made, with transponder signals silent.

Though last week Brazil’s President Jair Bolsonaro publicly vilified the Bouboulina, the owner of the Greek tanker has stoutly denied any spill, leak, or wrongdoing. It has offered to provide Brazil authorities with ostensibly exculpatory evidence such as tanker camera footage and sensor data. Currently, there is no hard evidence implicating the Bouboulina, or four other Greek-flagged oil tankers under suspicion.

But the growing global use of “ghost ships” to deliver clandestine crude is a warning of the extreme extent to which some oil fleet owners are driven by money and mercenary motives. In this case, the captain and crew of a mystery oil tanker departed Venezuela, fled the spill scene silently, and left ecological havoc along 2,500 kilometres of Brazil coastline.

We may never know who they were, and the oil tanker involved may very well be on another “ghost ship” charter by now.

Oil engineers and geology experts know that every blend of crude has a unique chemical signature based on such variables as specific gravity (density), viscosity, sulphur content, percentage of hydrogen, or presence of heavy metals such as nickel or vanadium.

Despite being continents apart, Alberta and Venezuela tar sands/oil sands blends are essentially twins, though not identical ones. (Similar sour, heavy oils are produced in Mexico, Colombia, and the Persian Gulf.) Both are bituminous, though the Venezuelan crude has a higher ratio of extra heavy oil.

So the safety margin for oil tanker leaks, accidents, negligence, malfeasance, or ordinary incompetence when carrying any tar sands/oil sands crude is virtually zero. Those long odds reach the vanishing point with the pending shipment of one billion barrels of diluted bitumen through the Salish Sea and across the Pacific during the next five decades.

That shipping volume and time frame mean another Brazil tragedy could certainly occur somewhere en route. It could happen in Vancouver harbour, or 200 kilometres into the Pacific, or near the coast of an Asian customer. The offending oil tanker might not be identified. It might take a month or more before the danger is even discovered. A serious accident, spill, or leak may prove impossible to clean up. The costs may be incalculable.

That may seem wildly speculative—except that this just happened 700 kilometres from the Brazil coast.

One original, glaring failure of the federal project review process which endorsed the Trans Mountain pipeline expansion was the lack of due diligence on oil tanker safety, clean-up capability, and the impact on marine species in the Salish Sea in case of accidents. In 2018, the Federal Court of Appeal ordered that final TMX approval be suspended until credible solutions are identified.

But the Brazil tragedy shows that humans are the wild card when it comes to shipping a million barrels or more of dangerous tar sands/oil sands crude in a single cargo. The highest levels of ship maintenance, piloting, crew training, and integrity are obligatory. There can be zero negligence, recklessness, incompetence, or commercial avarice undercutting safety.

Yet all these have happened in previous maritime accidents, from the Exxon Valdez, to the Costa Concordia passenger ship tragically capsizing in Italy, to the rust-bucket oil tanker MV Erika breaking up in an Atlantic storm in 1999. It contaminated 400 kilometres of French coastline with 20,000 tonnes of escaped crude, and sabotaged regional fisheries.

In the end, global ship owners and oil tanker crews have only their conscience to weigh against the spectre of huge liability damages and imprisonment stemming from accidental leaks or spills. If this involves sunken and slowly dispersing dilbit, that confers a unique time window to escape detection and not report what could be financially and ecologically ruinous.

Perversely, the innate properties of any tar sands/oil sands crude spilled into the ocean means it comes with a kind of “get-out-of-jail free” card. Exactly that kind of impunity underpinned the tragedy still unfolding in northeast Brazil. It could happen again anywhere, anytime.

Those living in the Salish Sea region can calculate the number of ocean tanker trips and different ships and crews it will take to deliver one billion barrels of bitumen from Burnaby to Asia. Then the danger calculus can be multiplied by the nautical miles for each Asia-bound shipment, and the cumulative sailing time it will take to make all those deliveries.

The chemical composition of TMX dilbit will require nothing less than perfect oil tanker performance, and perfect human conduct, for all of the next half-century. Given the oil volumes, trips, distances, and sailing times involved, proceeding any further will not just tempt fate. It will be giving it the middle finger.