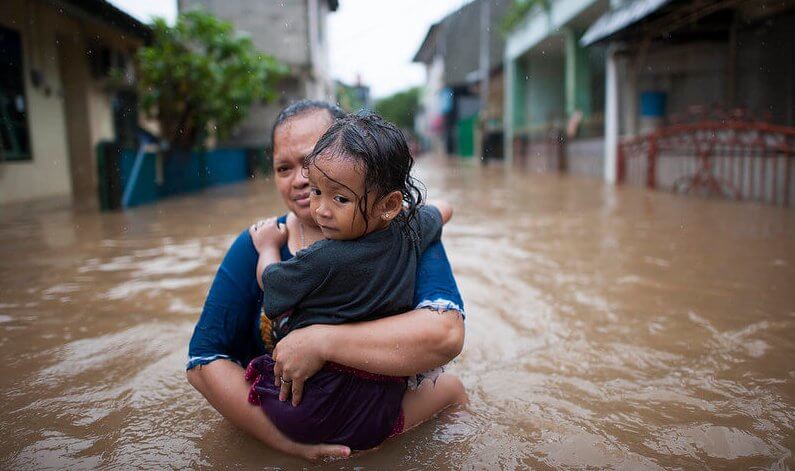 The reality of coastal flooding in Jakarta. Image: By Kompas/Hendra A Setyawan

Millions of us now live in danger: we could be at risk from future high tides and winds, says a new approach to measuring land height.

LONDON, 4 November, 2019 – Researchers have taken a closer look at estimates of coastal land height – and found that the numbers of people already at risk from sea level rise driven by global heating have multiplied threefold.

More than 100 million people already live below the high tide line, and 250 million live on plains that are lower than the current annual flood heights. Previous estimates have put these numbers at 28 million, and 65 million.

And even if the world takes immediate drastic action and reduces greenhouse gas emissions by the end of the century, at least 190 million people will find themselves below sea level.

If the world’s nations continue on the notorious business-as-usual track and go on burning ever greater volumes of fossil fuels, then around 630 million will, by the year 2100, find themselves on land that will be below the expected annual flood levels.

“These assessments show the potential of climate change to reshape cities, economies, coastlines and entire global regions within our lifetime,” said Scott Kulp of Climate Central, who led a study published in the journal Nature Communications.

“As the tideline rises higher than the ground people call home, nations will increasingly confront questions about whether, how much, and how long coastal defences can protect them.”

At the heart of the new research is a revised estimate of what constitutes sea level, and how it should be measured. Individuals and communities find out the hard way how the highest tides can rise to poison their farmlands with salt and wash away the foundations of their homes.

But the big picture – across nations and regions worldwide – is harder to estimate: for decades researchers have relied on satellite readings, confirmed by flights over limited spaces with radar equipment.

“There is still a great need for . . . more accurate elevation data. Lives and livelihoods depend on it”

But space-based readings by Nasa’s radar topography programme tend to be over-estimates, the researchers argue. That is because the technology measures the height of the first reflecting surface the radar signal touches. In open country, this may not matter. But forests and high buildings in densely-peopled cities distort the picture.

In parts of coastal Australia, and using a new approach, the researchers found that satellite readings delivered over-estimates of 2.5 metres. So global averages in the past have over-estimated, by around 2 metres, the elevation of lands that are home to billions.

Research of this kind helps clarify the challenge that faces governments, civic authorities and private citizens: communities grow up along low-lying coasts and estuaries because these provide good land, reliable water supplies and easy transport. But the catch with flood plains is that, sooner or later, they flood.

The repeated evidence of a decade of climate science is that floods will become more devastating, more frequent and more prolonged for a mix of reasons.

Soils will subside because of the growing demand for groundwater and for clays and stone for bricks and mortar; because global average temperatures will rise and oceans expand as they warm; glaciers will melt and tip more water into the sea to raise ocean levels; and tropical cyclones will become more intense to drive more destructive storm surges.

Researchers have already warned that sea level rise could be accelerating, to bring more flooding to, for instance, the great cities of the US coasts, while some cities can expect ever more battering from Atlantic storms.

Coastal flooding is likely to create millions of climate refugees even within the US, and the worldwide costs of coastal flooding could reach $1 trillion a year by the end of the century.

The latest study confirms that the hazards are real, and may have so far been under-estimated. The researchers calculated that, in parts of China, Bangladesh, India, Vietnam and Thailand, places now home to 237 million people could face coastal flooding every year by 2050 – a figure 183 million higher than previous estimates.

The same study highlights faulty estimates of ground elevation even in the richest and most advanced nations. In some parts of the crowded coastal cities of New York, Boston and Miami, for instance, the researchers believe satellite readings have over-estimated ground height by almost five metres. They say their new approach reduces the margin of error to 2.5 cms.

Right now, around a billion people live on lands less than 10 metres above high tide levels. Around 250 million live within one metre above high tide.

“For all of the critical research that’s been done on climate change and sea level projections, it turns out that for most of the global coast we didn’t know the height of the ground beneath our feet,” said Benjamin Strauss, president and chief scientist of Climate Central, and co-author.

“Our data improves the picture, but there is still a great need for governments and insurance companies to produce and release more accurate elevation data. Lives and livelihoods depend on it.” – Climate News Network