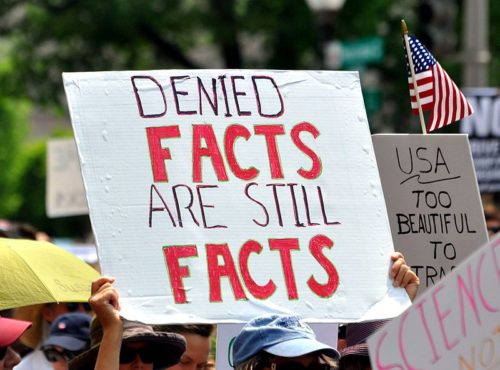 As the scientific reality of the climate crisis becomes ever more obvious and immediate, veteran UK environmental reporter Fiona Harvey warns her fellow journalists to expect rearguard actions from remaining climate denialists to become ever more vicious as they find themselves “running out of rope”.

In a recent post for The Guardian, Harvey recalls being heckled outside a House of Commons hearing on climate change by infamous denier and former chancellor of the exchequer Lord Nigel Lawson. Addressing a gathered crowd of more than 100 people, Lawson derided her as “the worst journalist of them all, because she should know better”.

She was deemed “the worst,” she adds, after reporting “the work of the 97% of the world’s climate scientists whose work shows human responsibility for global heating,” while failing “to give equal weight to the tiny number of dissenters”.

That experience alone showed that “fact-based arguments will never serve [the] purpose” of climate denialists, that “trolling is the last refuge of the discredited,” and that “we can expect much more of the same,” Harvey writes.

Looking back to when she began covering the environment full-time in 2004, Harvey recalls that climate was once “dismissed by journalists as a ‘slow burn’ issue: day after day, the ice melts a fraction, the sea laps closer to shore, the carbon count ticks slowly upward, and the story remains the same.” Today, it’s become urgent front page news.

“Few people imagined 15 years ago that climate protest would become by now a mass movement, with thousands of people prepared to be arrested and schoolchildren around the planet shaming their elders by going on strike,” Harvey writes. Similarly, “the likes of veganism and the no-fly movement were easily dismissed as fringe fanaticism, never to catch on.”

And “few people would have dared forecast in 2004, when [the Kyoto Protocol] appeared dead, that in 2015 a new global treaty would bind all countries to prevent heating crossing the crucial 2.0°C threshold”. Yet Harvey recalls standing in a “packed hall” in Paris “with hundreds of others, holding our breath as the gavel finally come down on stage, and suddenly delegates from nearly 200 countries were leaping to their feet, whooping and cheering and weeping.”

Since that inspiring, watershed moment, Harvey writes, “some governments have followed this up with laws to enforce net zero carbon emissions by mid-century.” But far too many have done next to nothing, while “audible in the background is the drumbeat of new science, data piling on data showing how close we are coming to disaster.”

Harvey says some of the forces against rapid climate action, like “financiers clinging to their business models, vested interests blocking progress,” were predictable. Others, like the juggernaut of American shale oil were “less so,” and “fewer still foresaw a Donald Trump presidency”.

Citing her own recent report on the rise of colossal state fossils like Russia’s Gazprom and Saudi Aramco, Harvey warns that while “giants like BP and Shell may be painted as villains,” 90% of the world’s oil reserves are now in the hands of national oil companies which need “answer only to their governments”, many of whom “pay only lip service to transparency”. That shift, she says, bodes ill for the climate fight.

But at least, finally, “no one can now plausibly say there is not enough data, or that we lack the technology, or that saving the climate is too expensive. All of these pretexts have been exploded by patient scientific work.”

With such inconvertible truths so ready to hand, she concludes, it remains for journalists to ensure that climate denial has no place left to hide, whether in boardrooms, on the websites of fake news, or behind a populist mask.