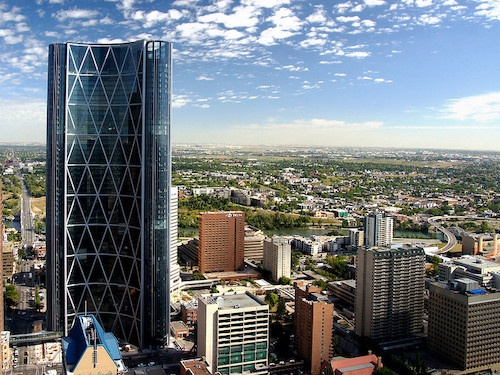 This post has been corrected to update the photo of Encana headquarters in Calgary. Thanks to a local reader for the heads-up.
The overwrought grief that greeted Encana Corporation’s decision to move its Calgary head office to the United States shows Canada and Alberta at a crossroads, facing an increasingly obvious choice between yesterday’s energy options and tomorrow’s.

At stake are the country’s ability to bring its disgraceful greenhouse gas emissions under control and take its place as a global climate leader, and the potential for every province and territory—but particularly Alberta and Saskatchewan—to tap into the massive opportunities in a carbon-free economy.

The other question, less evident in this week’s coverage of the Encana decision but more clear in wider industry trends, is how much longer fossil companies will be able to offer any economic benefit to anyone, whether they’re “domiciled” in Calgary, the United States, or anywhere else.

Yesterday, the industry that introduced “de-manning” to the English language brought “redomiciling” into common usage, with Encana’s announcement of its impending head office move and rebrand—it’ll now be known as Ovintiv Inc. and trade on the New York and Toronto stock exchanges. Company management hopes the move will attract more U.S. investors to a business that is slowly shrinking, according to charts in the Globe and Mail, relies on fracked gas and natural gas liquids for a thin majority of its sales (though it’s been shifting back into oil), and is already based largely in the U.S.

“The price of Encana shares fell nearly 7% on the Toronto Stock Exchange on Thursday, and has fallen by 61% in the past year,” the Globe reports, hardly the profile of a thriving company on which anyone should want to build their future. If the reorganization is approved by shareholders, courts, and the stock exchange, some Canadian investment funds will have to drop the stock.

The Globe says there will be no immediate job changes at Encana’s current head office in Calgary. But the paper still mourns the largely symbolic loss of an historic Canadian company, tracing its origins back to what turned out to be the country’s first big fossil subsidy—a 25-million-acre land grant, including some surface and mineral rights, to build the cross-country Canadian Pacific Railway in the 1880s, leading to the country’s first discovery of natural gas in Medicine Hat, Alberta.

Encana founder and frequent industry pundit Gwyn Morgan declared the relocation “heart-wrenching”, and Cenovus CEO Alex Pourbaix called it a “tragedy for Canada”, adding that “to see a company of that importance to Canada now exit its head office from the country, I think it’s a tough day”. Alberta Premier Jason Kenney chimed in right on cue, casting the decision as part of “the broader decline of the Canadian [fossil] energy industry, which I think is a deliberate policy of the Trudeau government.”

“The answer is unequivocally no,” responded Encana CEO Doug Suttles, when BNN Bloomberg asked whether the decision was triggered by last week’s federal election, which delivered a minority government with no seats in Alberta and a declared commitment to faster climate action. “This is not a political move. This is quite simply accessing the capital trends in the marketplace.”

A wider view came from Globe and Mail reporter Jeffrey Jones, whose opinion piece Thursday casts the situation as “a gut punch to Alberta”, but a mess of Encana’s own making. He says the company will need better financial returns —not a change of address — to draw investors.

“This isn’t just a broad-brush tale of political bumbling by Ottawa, nor, as Encana says, simply a desire to seek wider pools of capital in the United States,” Jones writes. Since former BP executive Suttles took over the company in mid-2013, “almost all of his major decisions have made the company more American,” not least his own decision to relocate to Denver. “Unfortunately for investors, none have made them wealthier.”

But there may not be much appetite this week for measured assessments of Encana’s decision. “In Alberta, the announcement added to fears within the industry that more companies will leave Canada,” the Globe writes. “Canada’s oilpatch is already hurting from five years of low crude prices and pipeline constraints, which resulted in capital investment in the sector dropping to C$37 billion in 2019 from $81 billion in 2014.”

And while Encana grabbed the biggest headlines, it wasn’t the week’s only industry departure: On Wednesday, Niksu, Alberta-based Citadel Drilling announced it was moving its six rigs to Texas’ Permian Basin. If it had stayed in Canada, explained CEO Dan Hoffarth, “the company wouldn’t exist. There just isn’t enough activity here to support our operations.”

All of which opens two questions that have not yet broken out in the media commentary on Encana’s announcement: Whether it’s in Canada’s or Alberta’s interest to fight the trend, and how well the country’s departing fossils will be able to sustain their operations in the U.S.

A ‘Western Agenda’ vs. Two-Thirds of Canadians

With a minority government still getting organized in Ottawa, the fossil lobby is already extending its reach to smaller parties in the House of Commons. “It’s easy to talk to people who agree with you,” Global Public Affairs Vice-President Ted Gruetzner told the Globe last week, but “you have to work with the people who are there.”

And days before Encana’s announcement, Globe columnist John Ibbitson laid out the “aggressive moves” on a “Western agenda” that Kenney and his Saskatchewan counterpart, Scott Moe, are working so hard to both embody and ratchet up.

“That would include the rapid completion of the Trans Mountain pipeline expansion, despite the protests of environmentalists and some Indigenous communities,” Ibbitson wrote. “It would also include moving ahead with Teck Resources Ltd.’s [financially tenuous] Frontier oil sands project, which needs cabinet approval. But that approval is bound to anger the New Democrats and Greens in Parliament, and environmentalists in general, because it will make it even harder for Canada to meet its target for reducing carbon emissions.”

If Prime Minister Justin Trudeau is listening as avidly as he says he is, that version of a Western agenda will run headlong into the faster, deeper carbon cuts that nearly two-thirds of Canadians (including 28% of Albertans and 33.6% of Saskatchewanians, silenced though they were by a first-past-the-post electoral system) demanded with their votes, and that the Liberal Party promised on the campaign trail.

Which means the large majority of Canadians will be looking to Parliament for some multi-billion-dollar, pragmatic decisions:

• Whether to buy into the genuine panic now flooding the industry, or look over the fossils’ heads to the massive transition in carbon reductions, economy, and jobs that their decline brings closer to reality;

• Whether to accept that the price of peace with two aggrieved oilpatch provinces is a fiercely-contested pipeline through sensitive coastal waters, a massive new tar sands/oil sands mine, and the additional, overheated demands that will no doubt follow as the fossil lobby in Ottawa regains its stride;

• Whether any Alberta premier would ever advise any federal government to simply accept that kind of “blackmail”, as they would no doubt classify it, if Quebec demanded similar consideration for Bombardier or the hated SNC-Lavalin;

• And whether anyone needs to be blackmailed, in Ottawa or in Edmonton, when the alternative is to embrace a cluster of energy efficiency, renewable energy, and energy storage industries that are already undercutting the fossils on price, and certainly vastly outperforming them on carbon. Down that road lie more than 10 million jobs already being created in the carbon-free economy with many millions more to follow, including massive opportunities for Alberta in efficiency, solar, and wind.

A Fossil Sector in Decline

Which means that, as the situation develops, Alberta’s prospects without fossil fuels may be far better than the fossils’ prospects without Alberta. Five years into a sustained price crash, BP and Royal Dutch Shell—two of the world’s most colossal fossils, between them accounting for nearly 15% of the shareholder dividends on the Financial Times Stock Exchange—are warning that the continuing growth in those returns is at risk.

That word came just days after Bloomberg said the so-called super-major fossil companies “will have some explaining to do” after their quarterly profits fall a projected 42%. It points to a decline that is far wider than any government’s decision—in Ottawa, Edmonton, or elsewhere—to accede to the industry’s latest demands.

It’s also a measure of the shaky business environment Encana and Citadel Drilling are jumping into. In the hydraulic fracturing fields that have driven much of the U.S. industry’s growth in recent years, oilfield service companies “are taking the unprecedented step of scrapping entire fleets of fracking gear,” Bloomberg reports this week, with low prices and investor skepticism threatening to idle nearly half of their equipment within weeks.

“We don’t learn from our mistakes in this industry, do we?” said analyst Joseph Triepke.

The fossil industry is big and complicated enough that countless factors can drive its rise or fall, and a collapse in one part of the sector can be offset by new growth elsewhere. So it’s hard to say in the moment whether Encana’s move or the shale fields’ decline is the beginning of the end.

What’s certain for Alberta and Saskatchewan is that a painful, repeat cycle of economic boom and bust is the very best the industry can offer. The worst is economic blackmail and national upheaval when a hardball political campaign fails to dissuade uppity voters from making the climate crisis a top ballot box issue.

As famed New York Yankees catcher and manager Yogi Berra (may have) once advised a former teammate, “when you come to a fork in the road, take it.” Encana’s announcement points toward a string of decisions, options, and opportunities that Trudeau and his Parliamentary negotiating partners dare not get wrong.