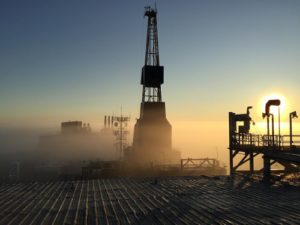 With insurance required at every stage in oil and gas industry projects, the companies that do the insuring have the power to stop the fossil business in its tracks. And some future insurance brokers say the industry has an ethical responsibility to do just that.

Schuyler Holder, a senior in the University of North Texas’ Risk Management and Insurance program,  initially attended the Risk Management Society’s national conference in Boston in May intent on networking to further his job chances. He ended up meeting activists from the Insure our Future campaign, who’d shown up with a distinctly different question: “When are U.S. insurance companies going to get serious about climate change and stop supporting coal and other fossil fuels?”

Writing for Teen Vogue, Holder notes that his hometown of Houston is a world oil and gas capital, but has also realized since Hurricane Harvey that it’s in the immediate crosshairs of climate change. From that starting point, “I want to build a career with a company that is taking responsibility for its role in this crisis, not one that is insuring drilling in the Arctic, or making payouts to an oil company for a spill in the Gulf of Mexico.” He adds that, “like so many members of my generation, I’ve started to see environmental crimes and the devastation of climate change in my own community.”

And he points to an opportunity for the next generation of young insurance professionals to have a say: the insurance industry is “expected to have 400,000 openings by next year,” he notes, and is “counting on an influx of young talent, including me and my peers, to bring it out of the baby boomer retirement hole.”

Which means the rules of the insurance game may be about to change. “We, myself and the other students that stand with me, are fighting for something so much bigger than a desk job after graduation,” he writes. “We want climate change policies that will bring an end to the use of coal and other fossil fuels; we want investments in sustainable sources of energy.”

Holder has launched a Change.org petition intended “not to steer students away from the industry, but to bring young and matured talent together in an effort to reform current business practices that are driving climate change.”