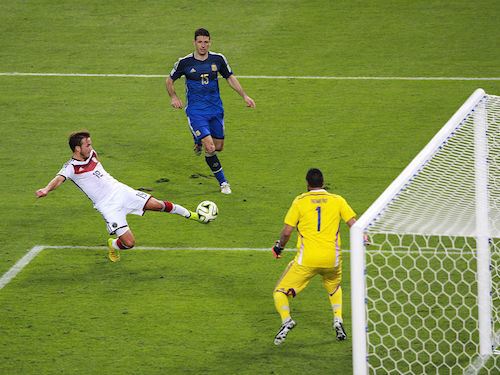 Gearing up to host the World Cup of soccer in 2022, fabulously wealthy Qatar is using its revenues from liquefied natural gas (LNG) extraction to air condition city streets, markets, and stadiums that would otherwise be death traps as temperatures soar to levels that are lethal to life.

Illustrative of this endeavour, reports the Washington Post, is the new Al Janoub open-air soccer stadium, one of eight being purpose-built for the quadrennial global tournament. On a recent day when the mercury hit 46.7°C in the shade outside the stadium walls, “a cool breeze was blowing” in the stands, courtesy of a state-of-the-art cooling system.

That the mere act of viewing a soccer match would otherwise pose a risk to health is emblematic of daily life in Qatar, “already one of the hottest places on Earth,” where the average temperature rise is already above the 2.0°C threshold the Paris Agreement affirmed as the outer limit of “safe” warming, the Post writes. The high heat in Qatar compared to some of its neighbours is partly due to “the surge in construction that drives local climate conditions around Doha, the capital,” along with the country’s location abutting the rapidly-warming waters of the Persian Gulf.

Fearing that “hundreds of thousands of soccer fans might wilt or even die while shuttling between stadiums and metros and hotels,” the Post says Qatari officials have rescheduled World Cup events, traditionally held anytime between late spring and mid-summer, to the relative cool of November.

Even so, for those with the leisure and cash to venture out to Doha’s markets and outdoor malls, mechanical cooling has become a  necessity. “If you turn off air conditioners, it will be unbearable,” said Yousef al-Horr, founder of the Gulf Organization for Research and Development. “You cannot function effectively.”

But the supreme effort at local climate control comes at a bitter cost, the Post notes. “Outdoor air conditioning is part of a vicious cycle,” as the systems generate the very emissions that “create global warming, which creates the desire for air conditioning, which creates the need for burning fuels that emit more carbon dioxide.” Trapped in a desperate spiral, Qatar is expected to nearly double its total cooling capacity by 2030, the paper states, citing data from the International District Cooling and Heating Conference.

Another vicious cycle playing out in Qatar is its continued pursuit of wealth from fossil fuel extraction. Already “the world’s leading exporter of liquefied natural gas,” the country “plans to expand LNG production by 43% by 2024, adding 60 new tankers to its armada.”

And all that LNG isn’t just for export. “Qatar is adding natural gas capacity faster than it’s adding solar—and at low prices,” writes the Post. “The country’s new dairy farm, a natural candidate for solar power, uses 35 megawatts from the natural gas-fired grid to keep the cows cool enough to survive the heat.”

Heat that is likely going to get much worse.

Mohammed Ayoub, senior research director at the Qatar Environment and Energy Research Institute, said a 2.0°C increase in average global temperature will mean 4.0 to 6.0°C warming in places like Doha.

“In rapidly growing urban areas throughout the Middle East, some predict cities could become uninhabitable,” reports the Post, especially places like Doha, where extreme temperatures go hand in hand with lethal levels of humidity.

The 2.7 million foreign workers who cater to the needs and wants of 300,000 native Qatari are already bearing the brunt of the country’s ever more harrowing climate, the Post states, citing a recent article in the journal Cardiology which reported that “200 of 571 fatal cardiac problems among Nepalese migrants working there were caused by ‘severe heat stress’, and could have been avoided.”

This past summer, responding to several such reports of lives lost to killing heat, Qatar’s Civil Defense Command “warned against doing outdoor work between 10 AM and 3 PM, putting gas cylinders in the sun, turning on water heaters, [or] completely filling fuel tanks or car tires,” and “urged people to drink plenty of fluids—and to beware of snakes and scorpions.” It also cautioned against “needlessly running the air conditioner.”

But the air conditioners are not a luxury, as Qatar’s small contingent of climate activists attests. Asked by the Post about the outdoor air conditioners, Arab Youth Climate Movement Qatar Executive Director Neeshad Shafi said, “that’s about survival. It’s too hot. That’s the reality.”