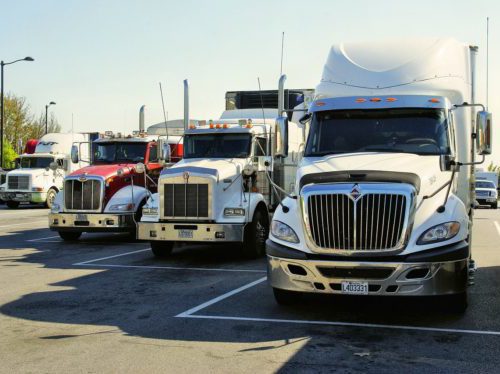 The in-depth research, conducted in partnership with cities, provinces, and Environment and Climate Change Canada, concludes that “all levels of government need to respond to the changing character of vehicle pollution,” the Globe and Mail reports.

“At the top of the list of recommendations” is tackling high-polluting diesel trucks which, while “fewer in number than other types of vehicles, contributed about half of all traffic pollutants on city streets and far more on highways,” the Globe writes. That pollution grows “worse in the winter months, because measures that are designed to capture pollutants before they are released into the air are less efficient in the cold.”

Moreover, “while pollutants from tailpipe exhaust have declined as cars have become cleaner, those emissions have been overtaken by other sources of traffic pollution, including fine particles and metal dust from increased wear on brakes and tires, a trend researchers say matches the growing prevalence of heavier consumer vehicles such as SUVs.”

The broader message from the report is that today’s vehicle emission regulations must be updated to recognize that smog is often now localized “right where a roadway is,” said research lead and SOCAAR Director Greg Evans, rather than occurring as something that would “blanket a city”. That localization is a problem, the Globe states, since “one-third of all Canadians live within 250 metres of a major roadway, a proximity that translate[s] into heightened exposure to traffic pollution.”

The report calls for responses from all levels of government, including “federal efforts to promote better technologies to cut pollution, provincial rules to get the highest-emitting vehicles off the road, and municipal planning that takes into account the local effects of traffic in places where people live and work,” the paper adds.

Evans said consumers can also make good choices by ensuring that any vehicle they buy “is the size we actually need.”

One measure of that opportunity is a recent International Energy Agency report that showed the number of electric vehicles on the road increasing by five million since 2010, compared to 35 million new SUVs. The result is that “SUVs, counted alone, are now warming our planet more than heavy industry,” Grist writes.

“If consumers’ appetite for SUVs continues to grow at a similar pace seen in the last decade, SUVs would add nearly two million barrels a day in global oil demand by 2040, offsetting the savings from nearly 150 million electric cars,” the IEA warned.