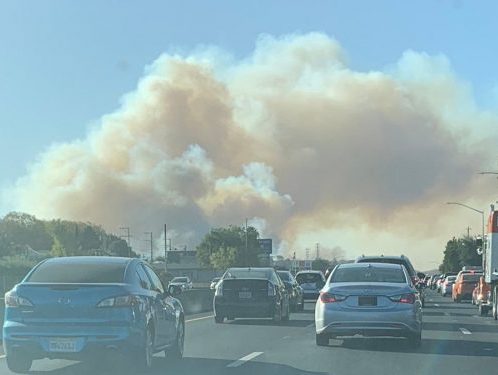 Failed power line equipment is showing up once again as a possible root cause of a massive wildfire that has forced 180,000 people to evacuate in California wine country, prompted Governor Gavin Newsom to declare a state-wide emergency, and led the state’s largest utility, Pacific Gas & Electric, to cut off power for 940,000 accounts, totalling more than 2.3 million users.

“We still, at this point, do not know what exactly happened,” PG&E CEO Bill Johnson told media Friday, after the utility reported a failed jumper on a transmission tower, around the time and place where the Kincade Fire first broke out near Geyserville. “The company is conducting an internal investigation but has not accepted responsibility for the fire, adding that officials don’t know precisely how it started,” the Washington Post reported.

The blaze began Wednesday night, had covered nearly 22,000 acres (8,900 hectares) by Friday, was moving at a rate of 30 U.S. football fields per minute at one point, and was only 5% contained as of Friday noon.

“I’m seeing people reporting that they’re going to stay and fight this fire,” said Sonoma County Sheriff Mark Essick. “You cannot fight this. Please evacuate.” Essick cast the decision to stay as a dangerous and “selfish act”, since it would put first responders at risk, too.

Windsor, CA resident David Culley, who lost his home in the 2017 Tubbs Fire, didn’t need convincing. “I’ve seen what a firestorm is, it’s catastrophic,” he told the Post, his voice shaking. “To know that a monster could be coming this way is really, really disturbing.”

While PG&E tried to track down the cause of the fire, the political reaction showed the utility’s reputation preceding it. While the cause of the fire “is neither determined nor is that investigation complete,” Newsom said, “I must confess, it is infuriating beyond words”. He accused the mammoth utility of leaving the state vulnerable by neglecting its infrastructure.

The Post said PG&E’s share value fell 30% Friday, potentially undercutting its ability to pull out of a bankruptcy brought on by past wildfire liability.

In the south, meanwhile, the NWS warned of “extremely critical” fire risk, with offshore Santa Ana winds bring gusts up to 65 miles (104 kilometres) per hour to Ventura and Los Angeles counties. “The fuels and vegetation are critically dry. The expected weather will create an environment ripe for large and dangerous fire growth, especially Thursday and Friday,” said the NWS forecast office in Los Angeles.

“Some gusts this weekend might reach 120 kilometres per hour or higher as part of a ‘historic’ wind event,” the Associated Press added, citing the NWS. “The winds could lead to ‘erratic fire behaviour” and send embers miles ahead of the main blaze, warned the California Department of Forestry and Fire Protection.”

“The next 72 hours are going to be challenging,” Newsom said Saturday afternoon. “I could sugarcoat it, but I’m not.”

PG&E meteorologist Scott Strenfel predicted the winds would peak Sunday. “It’s likely that many trees will fall, branches will break,” he said, raising the risk of further damage to utility infrastructure.

And in line with the forecasts, the Tick Fire in Los Angeles County remained totally uncontained after it started Thursday afternoon. “Video from local media showed fire bearing down on a Canyon Country neighbourhood, the flames moving steadily toward homes as residents fled,” the Post stated.

“The ongoing wildfires at both ends of the state come on the heels of the devastating 2017 and 2018 California fire seasons, which included the largest, most destructive, and deadliest blazes in state history,” the paper added. “It’s part of a clear pattern toward larger, more frequent and destructive blazes, as well as a longer-lasting fire season,” with CalFire citing climate change as “a key driver of this trend,” along with population growth and the increase in homes and businesses in vulnerable locations.

While public agencies fought to get the flames under control, the New York Times reported that the wealthiest residents of the state were turning to private contractors to protect their property. “These teams, depending on who you ask, are either part of the dystopian systemic inequality in fire-ravaged California or are offering an extra, necessary service beyond what public agencies can provide,” the paper stated. Don Holter, owner of private contractor Mt. Adams Wildfire, said the five private firms that work directly with homeowners don’t generally advertise their services.

“It’s not who you are, it’s who you know,” he told the Times.Wildfire Today reported more than a half-dozen new fires breaking out as of Sunday afternoon.